2010 Suzuki SX4 Sportback - The Little Hatchback That Could 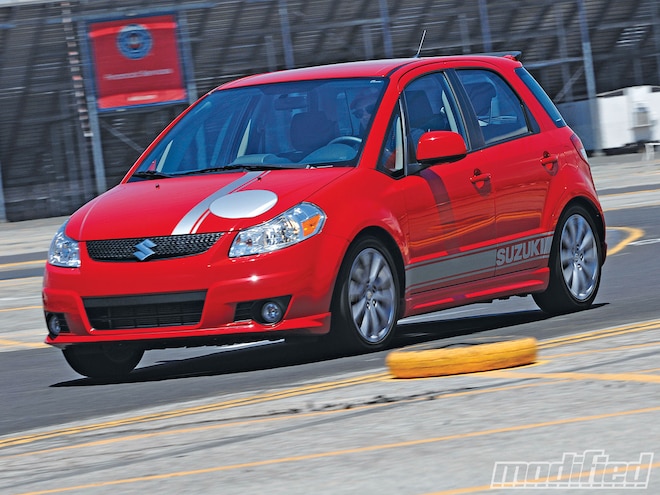 When you think of word association for Suzuki as an automobile manufacturer, the word “performance” wouldn’t be at the top of the list. Suzuki has had a good history of producing small, efficient vehicles that fit a certain type of individual—one looking for more gas mileage than horsepower. Yet, I do recall a certain turbocharged Suzuki Swift in the late ’90s that had some performance injected into it.

Let’s face it, Suzuki knows that it’s not going to be competing in the performance car market anytime soon. However, that doesn’t mean it can’t add a little more zip and oomph to its current lineup. Who wouldn’t want a versatile five-door hatchback that gets great gas mileage (22 mpg city, 30 mpg highway) but zips around a parking lot like a go-kart.

And the Japanese auto manufacturer has done just that with the new ’10 Suzuki SX4 Sportback. It’s still everything you would expect from a Suzuki—affordable and reliable—but there’s something more to it. Us car guys like to call it soul. It’s as if life has been injected into the car. No longer is it just sheetmetal and four inflated balloons meant to get you from point A to B; it’s a car you can enjoy getting into for the daily commute.

I’m not touting the SX4 as the next Honda Civic or Scion tC, but in the world of Suzuki’s it’s a big step up. Yes, it’s still a little too wagon-ish looking and the awkward B-pillar takes some getting used to, but handling-wise it was extremely composed and whipped back and forth effortlessly through the autocross that Suzuki had set up. The 2.0-liter, 150hp motor made for a rev-happy experience, but you were still reminded that this car was for getting around—not getting down fast in a straight line. Glaring at the shift knob, I was surprised to find a 6-speed manual, which when put through its paces, was smooth and precise. Looking further down into the cabin, I saw some metal “racing” pedals that would be typically reserved for the likes of an EVO or STI. It quickly becomes apparent that the new SX4 is shedding its old boring and bland shell and taking on a new more sport-oriented image. 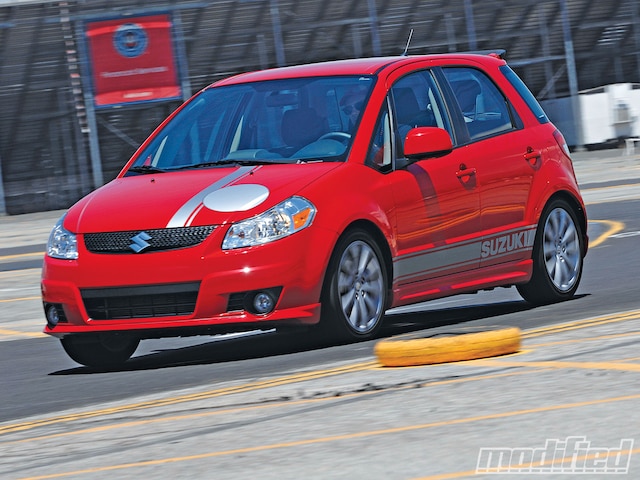 To keep a car affordable, you have to save costs somewhere and the interior shows. Plastic is used everywhere with some minor chrome accents to be found here and there. It does, however, come with some segment-leading options like a Garmin Nüvi navigation system and a Rockford Fosgate X-speaker stereo system.

To really hammer the new performance side of the SX4 home, Road Race Engineering (RRE) brought out three nicely modified versions of the SX4, two of which we could actually drive. The heavily modified blue SX4 was a SEMA show car and it was somewhat refreshing to actually beat on a car that typically spends most of its life on showroom floors. The other example, a silver turbocharged SX4, was equipped with all the right go-fast goodies including sticky tires, sway bars and big brakes. As soon as the turbocharger spooled, the difference in power from stock was night and day; the same goes with the handling—much more available grip. You could still tell that the original DNA of the SX4 was alive in RRE’s modified version. Although, it had just been injected with a healthy dose of steroids.

Photo 4/5   |   You can’t argue with the no-nonsense interior. Sure, it lacks some elegance, but at that price you can’t really complain.

What Suzuki needs to do is take some of the cues from RRE’s modified version and sprinkle it into the next gen SX4 and it will have a car that I can safely say is a real performer. Until then, Suzuki will have to be content with the SX4 Sportback being much sportier than the previous version, but still a ways away from being a true sporty hatchback.

2010 Suzuki SX4 Sportback - The Little Hatchback That Could
Photo /

SuperStreetOnline
1999 Honda Civic Hatchback with California-legal JDM B16A Swap, Type R styling and Porsche Paint
I had the master plan of collaborating with a group of buddies to build a 1999 Honda Civic “EK” hatchback. It would’ve been a joint venture with the guys from the NorCal Honda crew ATS Garage, my good friend Phillip Trinh and myself. The project started as a $1,500 fixer-upper, needing virtually every major component
Sam Du – Dec 7, 2020

SuperStreetOnline
This Mitsubishi Delica Turbo Diesel 4x4 Might be the Best JDM Overland Van
Imagine all the places you could conquer in a lifted, off-road-spec Mitsubishi Delica: a jungle safari across Kenya, overlanding in the snowcapped mountain ranges of Alaska, exploring the tropical rainforest in Brazil – you get the picture. These thrill-seeking vibes don’t exactly come off when you’re driving around town in your Land Rover, G-wagen or
Sam Du – Dec 4, 2020

Honda enthusiasts weigh in on the 2020 Civic Type R refresh and offer their experiences as current FK8 owners.

Toyota adds a 2.0 four-cylinder turbo model to its Supra lineup and also boosts power with engine updates on the 3.0 car.

Sam Du reviews the Super73 Z1 electric bike and gets ready to customize his own.

American-made, three-wheeled Polaris Slingshot is growing in popularity with 30,000+ owners, plus the introduction of a new engine and automatic option.

After getting some seat time in a 2020 Toyota Camry TRD we came up with 4 highlights to summarize our experience with this "not so boring" Camry.

Recently, Nissan threw us the keys to a 2020 GT-R Track Edition. After a few weeks behind the wheel we came up with a few key points to summarize how we feel about it.

On the Track: BMW M8 Competition & Mini Clubman JCW All4

Both the M8 Competition and Clubman JCW All4 bring track-oriented performance to the table but they do so with very different strategies. But does that make one more fun to drive than the other?