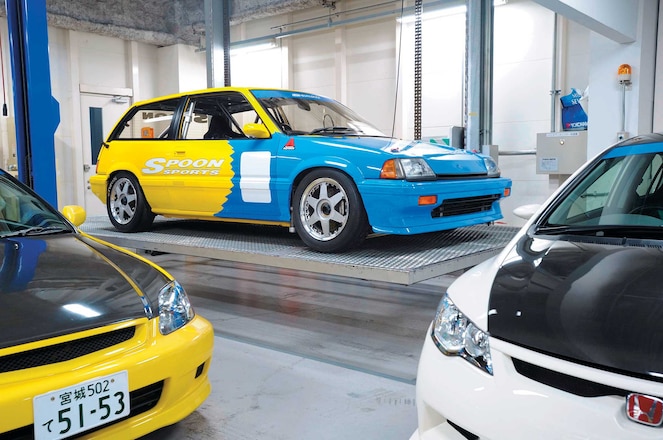 Spoon Sports president Tatsuru Ichishima is now an icon in the Honda tuning world, but there was a time when he once was a newbie. Back in 1985, when Spoon was still "Tatsuru Ichishima Company", the 33-year-old was building his very first race car on his own. Although he was a privateer, the Spoon founder was able to gain support from Honda and Mugen for parts. In exchange, he provided racing data. When we asked him why he was able to get this kind of support he just chuckled and said, "I used to be a test driver for Honda. Back then getting the support from the manufacturers was huge. But I didn't realize just how special that was until later. At that time, all I wanted was to race."

As a test driver, he had of course plenty of track experience and done his share of time underneath a car, but this race car was special. His Honda Civic E-AT would become the first Civic to enter the Japan Touring Car Championship series even before the Honda team and also become the basis of Spoon's racing concept and philosophy of today.

For many years the car sat in Spoon's speed shop, Type One, among their later race cars like the NSX Type-R and Integra DC5 as a symbol of the Honda tuner's racing heritage, although they can hang with new cars of today. It may be old-school, but you better come ready because this old timer can lap Tsukuba pretty quickly. The amazing thing about this car is that not only is it fast, but it's in great running condition and is an endurance car that can constantly go fast.

As you can see in Spoon's cars of today, their building concept was formed right at this time. Ichishima always stresses that a car must be fast and durable. One of the things that Spoon does to make this happen is weight reduction, and his target was to slim down to 900kg (1,984lbs). This was before carbon-fiber, high-tensile steel and titanium. As you can see the car is completely gutted out to the bone, reinforced and built up according to strict FIA Group A specs.

This third generation Civic was designed by Honda under the MM (man maximum/mechanics minimum) concept. It was clearly designed from the factory to become a fun-to-drive vehicle with the same DNA from Honda's motorsports. The car would later attain the popular Wonder Civic nickname and win the first Japan Car of the Year award for Honda. Basically, this was the car that put the Honda Civic on the map. It was an obvious choice for Spoon to take this car as a base vehicle and turn it into a full-blown racing machine.

Under the bulged hood is the 1.6L DOHC ZC engine with programmed fuel injection (PGM-FI). The ZC engine is to become the defacto sports twin-cam engine before Honda comes out with the VTEC. The ZC has a long stroke for a sports engine and had the speed that paralleled F1 engines back then. The PGM-FI gives lots of low rpm torque and smooth revving across the board. The Spoon racing E-AT boasts 230hp at 9800rpm where the stock E-AT Civic Si with the ZC gets 130hp at 6,800rpm. Within the JTC Series, the battle between the Civics with the ZC and the Corolla Levins with the 4A-GE becomes the big rivalry of both the makes and motors.

The ECU is made by Keihin, which is Honda's biggest electronics system supplier. Ichi-san modestly said, "We weren't able to set up the car during practice, so we had to wing it as we went." It was set up so the front and rear brake distribution, fuel mapping and ignition timing can all be controlled from the cockpit. Spoon also tuned the transmission gears to close ratios to adapt to the various tight curves of Japanese tracks. This also allows the Civic to operate near the maximum power band of the engine a majority of the time. Another tuning concept that Spoon still practices today is enhancing the performance of the original part. This means using the same hardware but by tuning and polishing, that same part contributes to raising the overall performance of the car. By buffing up, cleaning and pampering it and feeding it high performance transmission fluid, Spoon was able to lower the friction produced within the gearbox thus hoisting the endurance level. The current close gear set by Spoon still makes use of the same gear ratio from the Group A days.

Showa suspension was the way to go for Spoon since whether it's a racing car or not, Ichishima's cars are very easy to handle. He says the feeling is very linear and nothing tricky. If you already guessed, you guessed right; Showa still produces specially tuned Spoon legs to this day.

Many of Spoon's cars have made it over Stateside and this E-AT Civic did, too, in 2013. Making an appearance at the Honda Day event at Old Bridge Township Raceway Park in New Jersey, in addition to a handful of other places, the Spoon president was able to give fans a special look at racing history.

SuperStreetOnline
10 Classic JDM Cars You've Probably Never Heard Of
There are Japanese classics, and then there are these old-school JDM oddballs - educate yourself on some uncommon J-spec machinery.
Alex Nishimoto – Apr 3, 2020

SuperStreetOnline
Street Legal R30 Nissan Skyline Coupe Painted Millennium Jade w/ 300hp Turbocharged 4-Cylinder FJ Engine
It takes an extraordinary type of Nissan buff to import a JDM Skyline, especially one that's not on everyone's wish list, however, one that is just as iconic as the GT-Rs we all hold in such high regard.
Sam Du – Apr 3, 2020

SuperStreetOnline
Friday Night Watch Party: Join NASCAR Driver Corey LaJoie and Stream 'NASCAR ALL IN: Battle for Daytona'!
If you haven’t seen the MotorTrend original streaming series, “NASCAR ALL IN: Battle for Daytona”, and taken a revelatory inside look behind the scenes of professional stock car racing, now is the perfect opportunity. Not only do plenty of us have extra time at home on our hands right now, but on Friday, April 3,
Mac Morrison – Apr 3, 2020

SuperStreetOnline
Paul Walker Turning Hot Laps In His Time Attack BMW E92 M3
In 2010, Walker campaigned an E92 M3 in the Redline Time Attack championship, a series that traveled the US but had a good chunk of their events on the West Coast.
Bob Hernandez – Apr 2, 2020

There are Japanese classics, and then there are these old-school JDM oddballs - educate yourself on some uncommon J-spec machinery.

Rare Nissan Skyline R30 is tuned to 300hp with a FJ20 four-cylinder, repainted Millennium Jade and imported to America.

NASCAR driver Corey LaJoie hosts MotorTrend’s Friday night watch party and answers your questions as we stream the season finale of “NASCAR ALL IN: Battle for Daytona” on YouTube and Facebook.