Home  |  Features  |  NSX Camper: How To Take A 1996 Targa Top On A Cross-Country Road Trip
Subscribe to the Free

Ditch the Suburban and Winnebago, this is the dopest thing you could possibly take camping!

Are you aroused as much as we are because this 1996 Acura NSX-T pitching a tent is one of the coolest things we've seen all year! This NSX recorded one of the highest "liked photos" on our Instagram this June, and with the help of photographer Martin Astromowicz, we're able to bring you this exclusive feature!

For the most part, we all know a little bit about the heritage and high points of the first-generation NSX—a mid-engine, rear-wheel-drive, circuit-ready sports car blessed by the hands of Ayrton Senna. The NSX was a posterchild for Honda fans and performance car enthusiasts alike; however, repurposing the two-seater roadster into a cross-country, camp-ready vehicle was unheard of, and that's just what owner Chris Cut of Connecticut set out to do. 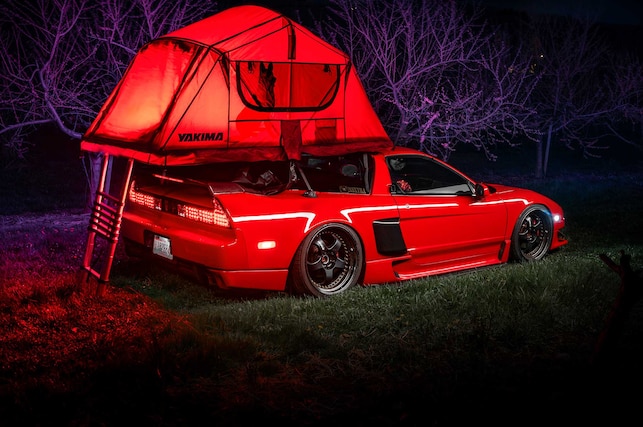 Chris' story is quite the interesting one as he was basically at sea for much of his adult life laboring as a commercial fisherman for 17 years. He admits the job was quite lucrative, but being away from his family, friends and project cars was the worst. He's come to appreciate living on American soil every day, which is perhaps what spawned the initial interest for this NSX camping project.

I've been able to chat it up with Chris and he's quite the hoot. I guess you have to be to take an NSX camping! As a disclaimer, don't mistake this for an off-road or overlanding NSX. It's more of a road trip-ready warrior that's equipped with air-ride to overcome uneven trails and campgrounds, and of course, the elevated tent with room for two and a dog. This is only stage one of the build as Chris is in the process of finishing up a matching trailer on his YouTube page. Once completed, you'll be hearing more from him or better yet, seeing him pass you by on his journey across America. 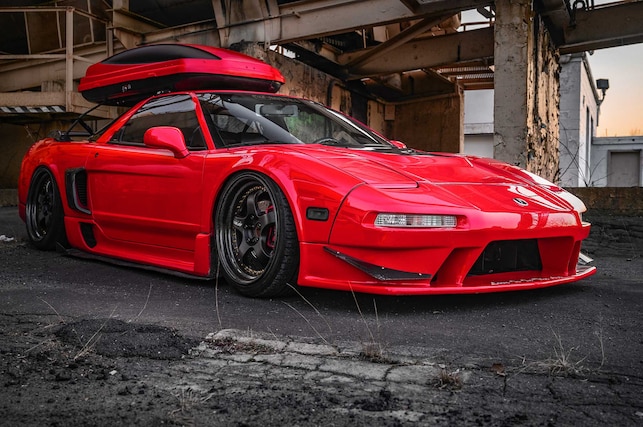 1-on-1 Interview with Chris Cut

When did you fall in love with cars?

My late father was a car guy, and he had lots of cool cars as he was growing up. He taught me mechanics, starting me off on dirt bikes when I was a kid. I quickly learned that if you can do your own work on cars, that you'd save money on repair bills, and thus be able to afford a more desirable car from the repair savings. I often found myself in the driveway with him, helping him swap transmissions into our old family beaters in order to keep them going without having to pay shops thousands of dollars. He applied this same logic to his house: do your own plumbing and you'll have extra money for the things you want in life. For me, that meant cars and money for parts to modify them.

So, when did your fascination with the NSX start?

When I was nine years old I went to the dentist and in the parking lot of his office was my dentist's silver NSX. It was the first time I had ever seen one. All I wanted to do was stare at it and ask him questions about it. I was probably the only kid who wanted to go to the dentist's office after that, just so I could ask him more about his car. I'd often skateboard there with my friends just to go look at it. We'd sit there for hours just staring at it. As I got closer in age to being able to get my license and buy a car, I'd constantly find myself on Craigslist looking at them for sale. I knew I couldn't afford one, but it was nice to daydream that someday I was going to.

What'd you pick up first instead?

I ended up getting a 1990 Nissan 240SX. It was a single owner car, and I got it for $1,300 bucks. This was before they were desirable and clean examples were cheap. I used that 240 to go to the docks to get myself on a commercial fishing boat, and I spent many days at sea reminding myself that someday I'd be able to get an NSX if I just stuck with it and kept working hard at this job I hated. Many years and several cars later, that finally came true. 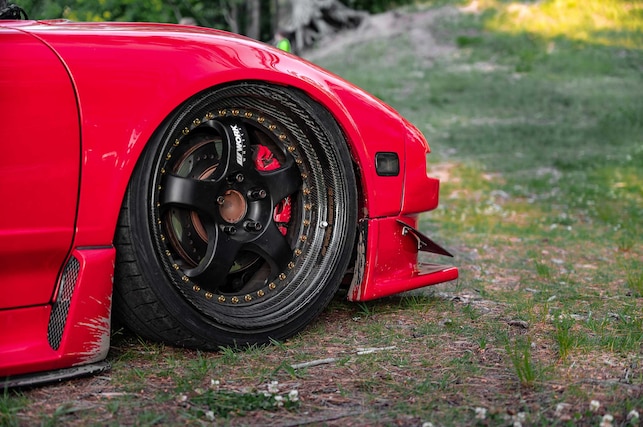 I picked up my first NSX three years ago on Valentine's Day. It was the cheapest Targa I could find in the country.

Tell us a little bit about the mods?

Not much for performance stuff besides a K&N filter, Comptech headers, and Pride V2 RFL exhaust. I would love to do a forced induction setup in the future when I have the funds... It's on D2 air suspension with ride height sensors and Air Lift 3H management. It lifts to give me about 8-inches of ground clearance. This should allow for some mild off-roading to get to camp sites. The rest of the stuff is just cosmetic or for practicality.

A custom roof rack, which I can either put a cargo box or rooftop tent on. 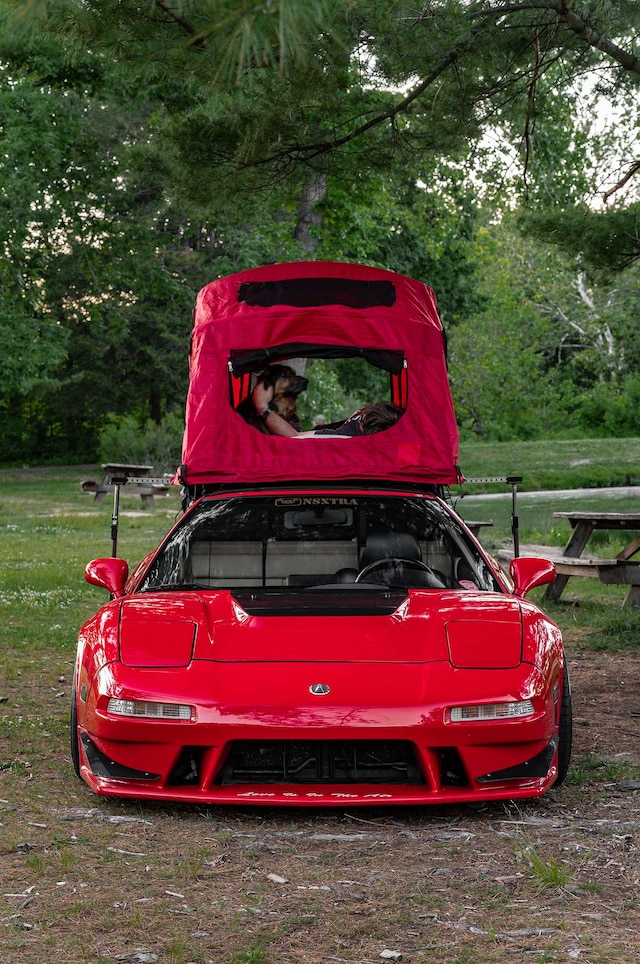 Let's get into this tent as it's what everyone is asking about. How difficult is it to put on?

I've noticed the most difficult part of any custom project is figuring out how to do it.
I designed a rack in my head and then did my best to explain the concept to a friend with a TIG welder. I had a few requirements:

The tent itself is rated for 400lbs but the thin aluminum quarter panels on the NSX itself are definitely not. The last thing I wanted to do was ruin my quarter panels, so I came up with a solution: telescoping poles that attach to the roof rack and extend down to the ground. This transfers all of the weight from the rack directly to the ground. I've since exceeded the tent's 400lbs weight capacity by having two people and a dog sleep in the tent without any problems.

That's pretty frickin' awesome! Word on the street is that you're taking your project a bit further building an NSX trailer. Can you elaborate?

I was searching for a rear clip to build an NSX trailer and found a really cheap shell down in Washington DC. The reason it was so cheap is because of its title status. The car was in two accidents, the first in the rear which totaled out the car. It was issued a salvaged title, then rebought and repaired, and then issued a rebuilt title. Then the second accident happened, and car was hit hard again, this time in the front. It was hit so hard that the floor buckled. It was salvaged again, and of course, insurance companies won't salvage a car twice, so it was issued a junk/scrap-only title. This made it a perfect candidate for a trailer as it was the only way this car would have a second chance of being on the road legally again. I literally picked up the NSX shell by hand, which only weighed about 400lbs, stuffed it into the back of a box truck, and off it went into my garage to get cut in half.

It's a relief to hear that you didn't chop up a perfectly good NSX!

Cars are meant to be driven and enjoyed, and this trailer will see more road time than a lot of people's pristine NSXs. It was the only way this NSX shell would ever be on the road again, legally, and I'll be putting it to good use. 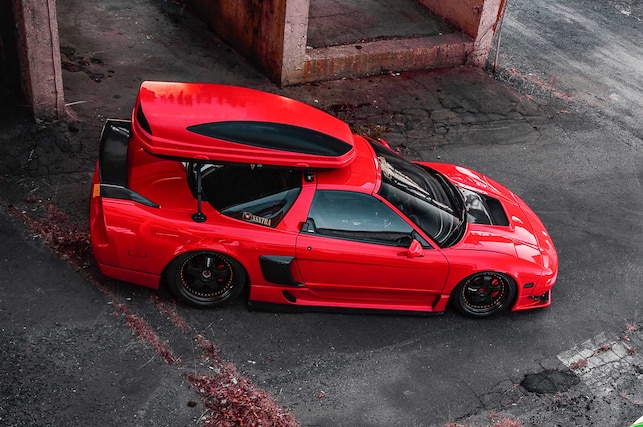 What's the plan for this cross-country road trip?

I'm going to let my Instagram followers vote and decide my destinations for the most part, but my basic route is that I'll take the northern route from Connecticut to the West Coast, Pacific Coast Highway to Southern California, then return on the southern route back home. I want to see Vegas, Yosemite, and Yellowstone National Parks, among others.

We'll see you when you reach LA! Where'd this whole idea come from anyways?

My goal for this first trip is to see as much of the country as possible. I want to camp out in national parks with my dog and visit friends along the way; however, the bigger picture is that I want this to be something I do every year, and in a different car each year. Maybe next year is an Audi R8 or R35 GTR. I want this to turn into a rally where I go cross-country, and people join in for portions of it or even for the entire trip if they want. I keep picturing that scene from Forrest Gump when he ran across the country and people joined in with him. I know it's a silly idea, but I think it would be awesome if it actually works out!

Love the idea! Nothing beats a good road trip.

Well, road trips can be expensive, especially if you're staying in hotels. In that sense a roof top tent can be looked at as an investment. It will save you money on hotels if you're willing to forfeit some amenities and eventually it will pay for itself. Also, you can always sell the roof top tent when you're done with your trip. Another benefit to a roof top tent is that it provides extra storage. It frees up trunk storage because you don't have to keep a tent and bedding in your trunk. For example, even when the tent is stowed away and not in use, I keep all of the bedding, my clothes, and camera equipment inside of it. 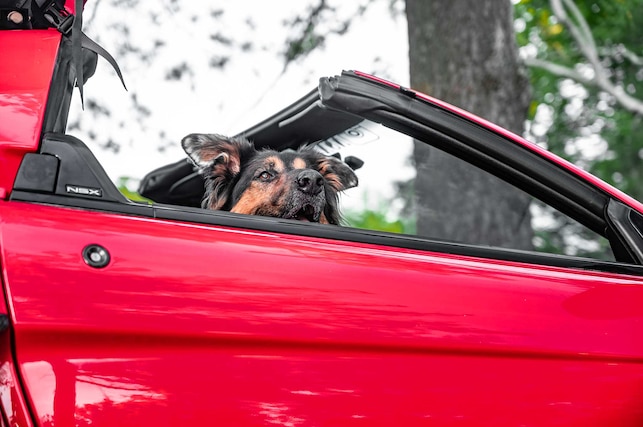 Last but not least, who's your furry friend?!

My dog's name is Cassius. He's a German Shepherd/Border Collie mix and he's the best dog in the world! He's twelve years old but you'd never guess it because of how full of energy he is. He loves going for car rides, and I'm excited to let him mark his territory by peeing in as many states as possible. 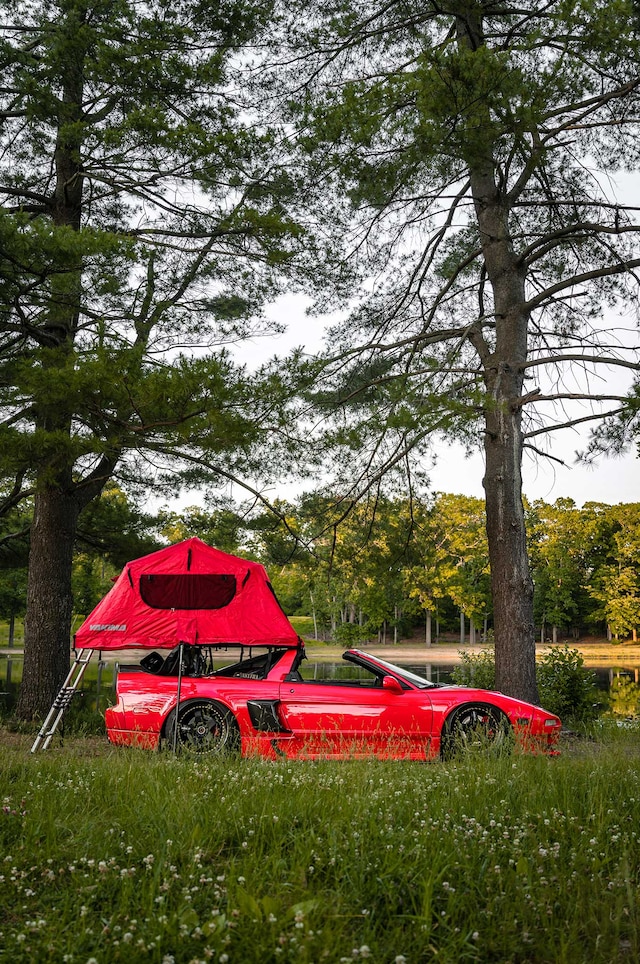 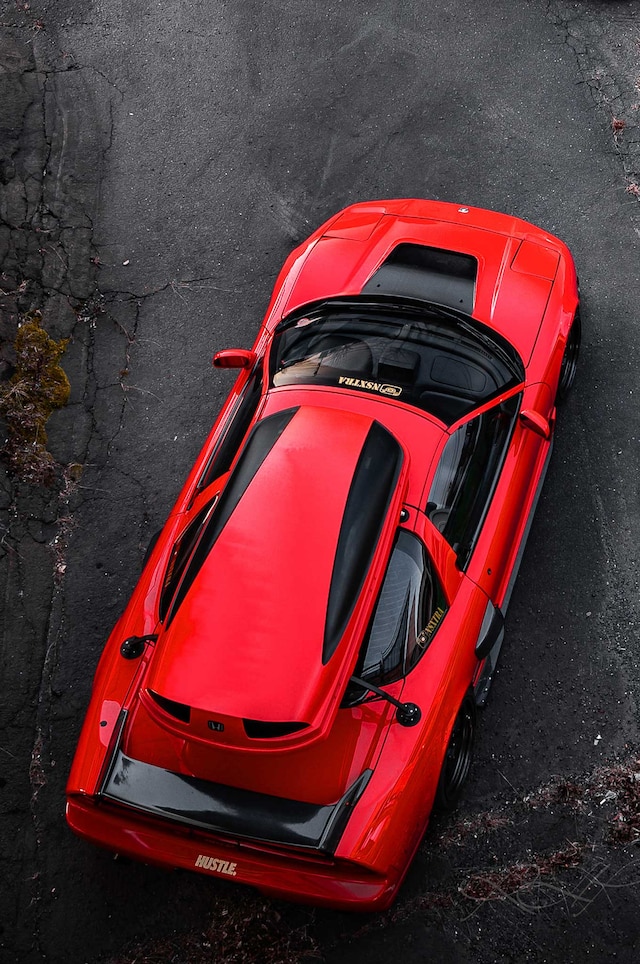 NSX Camper: How To Take A 1996 Targa Top On A Cross-Country Road Trip
Photo /

Lexus's V10, carbon fiber-bodied LFA supercar No. 425 of 500 will cross the block this October at Barrett-Jackson's Fall Auction in Arizona.

Our Top 10 Favorite Speed Racer Episodes of All Time

Speed Racer is now streaming on the MotorTrend App, and to celebrate, here's a list of our top 10 favorite episodes.