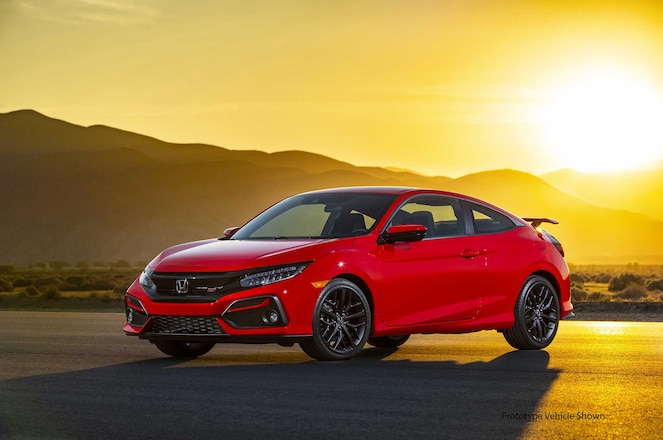 As the saying goes, "If it ain't broke, don't fix it." The 2020 Honda Civic Si Coupe and Sedan are both far from broken, and—if you've been paying attention —also among our favorite cars available on the market today, with a starting MSRP of just $25,000. It's a lot of (fun) car for the coin, but we'd expect nothing less from a Civic grade that has become over the past 30 years an icon in the North American sport compact segment. The Si is still THE perfect entry vehicle into Honda performance, and here are our 5 takeaways from recently getting to drive the latest 10th-gen. for the first time. 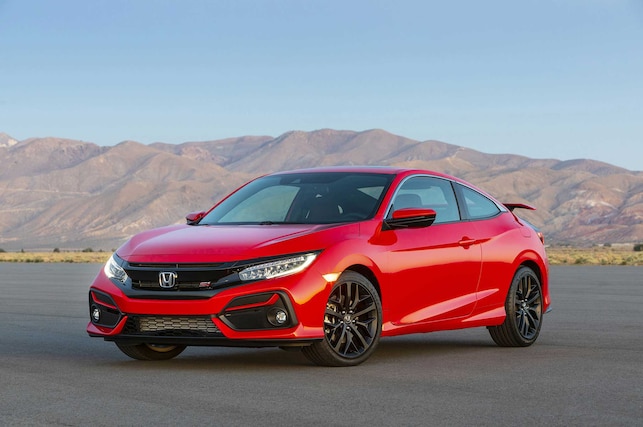 With this "midcycle refresh" there really wasn't a whole lot for Honda to mess with. There are no big body changes with the update, but right off the bat you'll notice the Civic Si Coupe and Sedan's newly redesigned front bumper, lower grill, and LED headlights and fog lights, giving it an overall sleek and aggressive look; for the rear bumper on the Civic Si Sedan only, there's a minor aesthetic update on the lower grill. Both Civic Si Sedan and Coupe now come standard with newly redesigned matte black 18-inch wheels, wrapped in all-season tires or with factory option summer tires.

2. DRIVING IT DAILY WITH COMFORT FEATURES

Inside the Civic Si, you'll notice the added red accents on the seats and a touch along the dash trim. The rest of the interior is standard Civic, which is fine. What's also new to the midcycle refresh is Honda Sensing, which is now standard on the Civic Si Sedan and Coupe, along with a powered moonroof, heated front seats, and lastly, Honda finally added a physical volume knob to the infotainment system with improved Apple CarPlay and Android Auto. As far as fuel economy, the Civic Si gets 26 city/36 highway, and 30 combined, which is good and will save you plenty at the pump (if you live in California, that is). If you need a vehicle that can haul your belongings, friends, be comfortable daily, and good on gas, the Civic Si definitely checks all of the boxes.

On the capability side of things, the Civic Si doesn't disappoint. It's still powered by a 205hp, 192 lb.-ft. of torque, 1.5-liter DOHC direct-injected turbo four-cylinder engine mated to 6-speed manual transmission, which is standard on Civic Si models, but what you'll find that's different about the midcycle refresh is a shorter final drive, which is enough reason to spend the few extra dollars over most of the rest of the Civic lineup for the Si (unless you're looking for the pure performance—and corresponding premium—of a Civic Type-R). We should also note the Civic Si handles not too dissimilarly from its track-ready Civic TCA race car kin.

We've already seen plenty of examples of the 10th generation Civic, including our neighbors at Honda Tuning project Si build. Companies like Greddy, 27Won, Hondata, PRL, and AEM Electronics, to name just a few, already have bolt-on upgrades for the 10th-gen. Civic Si and there won't be a shortage of aero mods and lip kits in the marketplace as well. For those looking for something hardcore, HPD offers a Civic Si TCA race car program that you can literally purchase online, which builds and supports a turnkey race program for $52,500 that does not include delivery, but is ready to compete in the Pirelli Challenge TCA Class.

The Civic Si Coupe and Sedan have already hit dealership lots with a starting MSRP of $25,000, not including a destination charge of $930 and the option of summer tires. From the exterior and interior styling upgrades, added pep, and a laundry list of technology and safety equipment, what more can you ask for under $30,000 that is affordable and has the aftermarket support? Not much. It's a great daily that doesn't cost an arm and a leg and is still really fun to drive—like it has been for generations—making the 2020 Civic Si a value proposition that's hard to ignore. Honda Tuning
Video of Mercedes-AMG GT Black Series Terrorizing Nurburgring
Rodrez: It’s the measuring stick that offers as much speculation and attempts to discredit driver achievement as it does real-world data and raw, obsessively focused attempts to chip away at the clock. The Nurburgring serves as a standard by which most automakers set their sights. It arms internet debate specialists with numbers and comparisons by
Nick Yekikian – Nov 21, 2020

Honda Tuning
Supercharged OEM-Plus 2008 Acura TSX Street & Track Car
It’s safe to say that Angel Pena, owner of this supercharged 2008 Acura TSX, has a “type.” Having been enamored with Acura’s entry-level sedan ever since it was first introduced, he knew right away he’d get his hands on one, and eventually, he did just that. Today, a decade later, he’s moved on to his
Rodrez – Nov 21, 2020

Honda Tuning
Riding Shotgun In The New 2022 Subaru BRZ
Rodrez of Super Street: If the “swoosh” of the front fenders and pontoon-like sideskirts bolted to a FR platform that promises a sporty experience from behind the wheel doesn’t scream “turbo” then we don’t know what does. No matter what we think, Subaru’s 2022 BRZ, unveiled this week in its final form, isn’t packing the
Jonny Lieberman – Nov 19, 2020

Honda Tuning
What We Know About the Upcoming 2022 Honda Civic Type R
Rodrez of Super Street: Did you get the “looks like an Accord, ILX, TLX, Audi, Jetta, Camry, Corolla, Charger” out of your system upon the debut of the 11th gen., 2022 Honda Civic prototype? Ok, cool. Let’s get down to what everyone’s been asking since Honda’s late evening launch of the upcoming Civic family this
Alex Nishimoto – Nov 19, 2020

Honda Tuning
Next Generation Subaru BRZ Debuts
At the end of the day, it’s all about perception. In enthusiast circles, Subaru is supposed to be one of just two current car brands that champions the horizontally opposed power plant, in addition to AWD layouts and turbocharging. By design, its BRZ naturally aspirated RWD coupe jointly developed with Toyota is going to be
Bob Hernandez – Nov 18, 2020