Less than a year after the introduction of the A90 Supra, Toyota comes back with the A91 models featuring a four cylinder and beefed up six.

In its first five months on dealership lots, Toyota USA sold 2,900 A90 Supras with an average selling price of $56,000-$57,000. At the 2019 SEMA Show, around 50 modified examples were on display, not to mention tons of aftermarket parts were already developed and ready to market. So despite the internet's general disapproval of the fifth-generation Supra's collaboration with BMW and lack of a manual transmission, it was clear there was no shortage of shops and enthusiasts that believed in Toyota's reborn iconic sports car—myself included.

This past February, Toyota made news once again after announcing a refresh with a more powerful 2021 3.0 model, a special A91 Edition, and the introduction of a 2.0-liter four-cylinder turbo. It's been a few months since the announcement and unfortunately, due to Coronavirus our planned track test of the new and revised Supras were put on hold; however, I was able to get a few days behind the wheel of both cars locally in Los Angeles. Here's what you need to know... 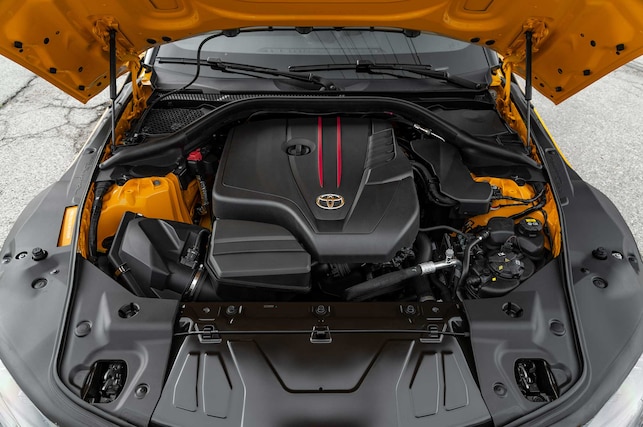 Lower Price for Younger Buyers. So why would anyone consider a four-cylinder? Well, the price, obviously... Official MSRP won't be released until mid-June, but you can expect a significant discount for the four banger, anywhere between $6-10K with much more attractive finance and lease options. Toyota also reiterated to us that they'll be supporting Formula DRIFT with the Supra for the first time ever with competitors like Frederic Aasbo and Ken Gushi, further placing the fifth-generation Supra in front of the eyeballs of younger car fans. 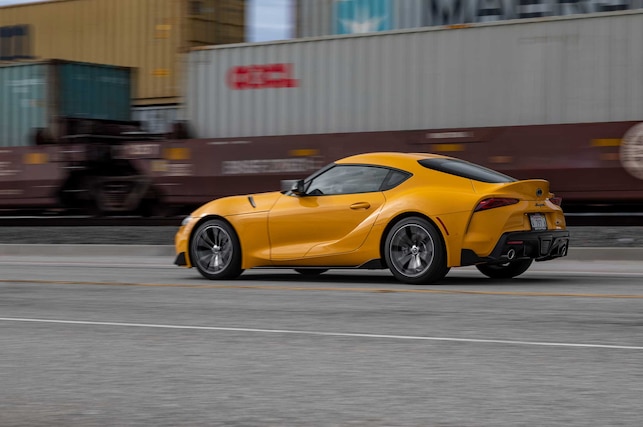 What's Missing/Changed. The four-cylinder won't get the active rear differential and suspension. The front brakes are smaller with single-piston calipers in place of the four-piston Brembos, as well as 330mm rotors as opposed to 348mm. 18-inch cast wheels are standard issue in comparison to the 19-inch forged wheels on the 3.0. A different exhaust was inevitable, but the tips feature a polished finish with smaller diameter. Inside, the power seats have been removed in favor of manual leather/alcantara, plus the base audio system has been stripped to only four speakers. Lastly, the springs and dampers have been retuned.

THE VERDICT ON THE 2.0L FOUR-CYLINDER

To me, it doesn't quite feel like a car worthy of the Supra nameplate, but it also doesn't suck to drive either. It's quick on its toes and handles superb. After five minutes in the car, you can already appreciate its perfect weight distribution and lighter weight. The 2.0 gives you ultimate control and grip, and steering inputs are quick and effortless.

As far as the downgrades go, for example, the absence of active suspension/diff and inferior front brakes didn't bother me too much on my canyon runs. On the road course where I'd be able to push the car a bit harder and to the limit, I could see where I could potentially run into a little more trouble. 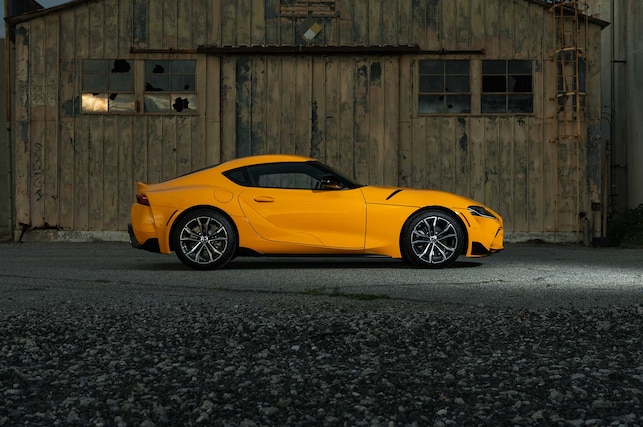 Acceleration is a full second slower when it comes to 0-60mph, and power dies off much quicker at higher RPM, as expected, but it doesn't mean it's a slug. In fact, I strongly believe once shops begin developing this B48 motor, an affordable ECU tune, downpipe and exhaust will remedy the 2.0's shortcomings.

Bang for the buck with a high aftermarket potential and with a visual appearance that's pretty damn hard to tell apart from the 3.0, the four-cylinder makes sense, don't get me wrong... But at the end of the day, as a current 3.0 Supra owner and an automotive journalist that bases a lot of his opinions on overall road presence and driver feeling, the 2.0 lacks the soul and roar I feel the Supra needs to have.

Engine Hardware. Contrary to initial guesses, it's not just an ECU tune that's bumped up power, but changes in the piston design, lowered compression from 11.1:1 to 10.2:1 (to accommodate the extra boost, of course) and a more free flowing six-port exhaust manifold as opposed to the 2020 model's two-port design.

Retuned Chassis. Most chassis/handling updates are to accommodate the increase in power and retain the car's balance. Aluminum chassis braces in the engine bay were added for stiffness, plus there was a recalibration of the power steering, active dampers and rear differential.

Windows Not Fixed. According to Toyota, there were not many complaints about the wind buffeting issue, so it was not fixed. As a 2020 Supra owner I'm surprised as anytime I'm cruising with the windows down above 35-40mph, the sound is simply unbearable.

Looks Almost the Same. Visually speaking, there's nothing that changes between the 2020 and 2021 3.0 model aside from the front brake calipers which now wear the Toyota Supra logo.

Quieter Exhaust. I'm kind of bummed about this but despite having more ponies, the 2021 model is quieter with the "pops" taken out due to revised catalytic converters.

What Timing. The big question is why didn't Toyota just release this engine package during the initial launch? According to Toyota, it just wasn't ready at the time of production, but having this powertrain was the ultimate plan for the Supra, which now matches the BMW Z4 M40i. 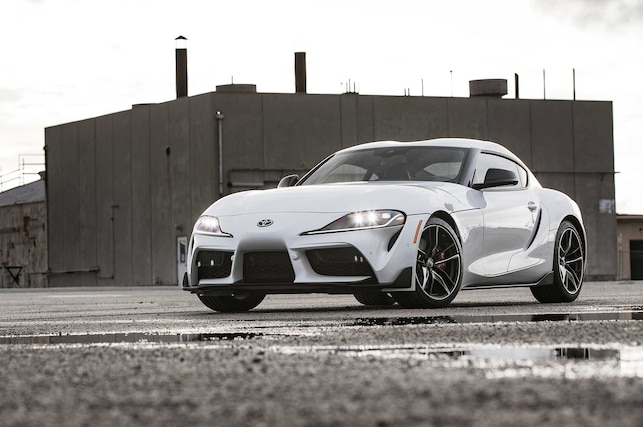 THE VERDICT ON THE 3.0L SIX-CYLINDER

Toyota didn't take any steps back with the 2021 A91 3.0 Supra, except maybe by making it quieter and not fixing the annoying wind buffeting issue. The significant bump in power is very noticeable and pulls strong all the way to redline.

The updated chassis tuning was intended to rebalance the car, but I felt the rear was bit more tail happy than the previous model year. 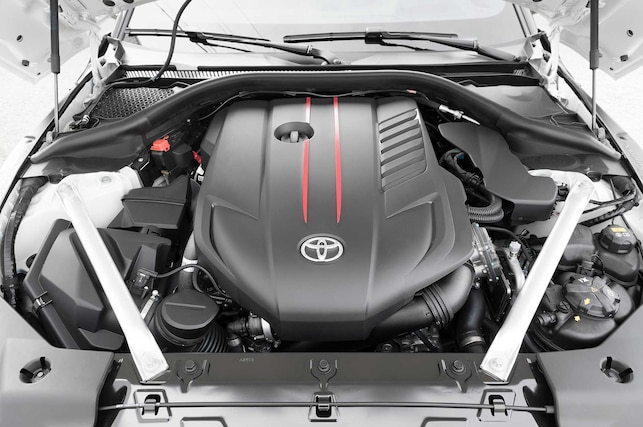 If you're still crying about the lack of 2JZ-GTE or manual transmission, then there's (still) nothing for you here. But if you were on the fence about the inline-six Supra the last time you visited your local dealership, it's worth holding out for the 2021 model, especially when Toyota suggests starting MSRP will be quite similar to the original $49,990.

IN CASE YOU MISSED IT

SuperStreetOnline
Video of Mercedes-AMG GT Black Series Terrorizing Nurburgring
Rodrez: It’s the measuring stick that offers as much speculation and attempts to discredit driver achievement as it does real-world data and raw, obsessively focused attempts to chip away at the clock. The Nurburgring serves as a standard by which most automakers set their sights. It arms internet debate specialists with numbers and comparisons by
Nick Yekikian – Nov 21, 2020

SuperStreetOnline
Supercharged OEM-Plus 2008 Acura TSX Street & Track Car
It’s safe to say that Angel Pena, owner of this supercharged 2008 Acura TSX, has a “type.” Having been enamored with Acura’s entry-level sedan ever since it was first introduced, he knew right away he’d get his hands on one, and eventually, he did just that. Today, a decade later, he’s moved on to his
Rodrez – Nov 21, 2020

SuperStreetOnline
Riding Shotgun In The New 2022 Subaru BRZ
Rodrez of Super Street: If the “swoosh” of the front fenders and pontoon-like sideskirts bolted to a FR platform that promises a sporty experience from behind the wheel doesn’t scream “turbo” then we don’t know what does. No matter what we think, Subaru’s 2022 BRZ, unveiled this week in its final form, isn’t packing the
Jonny Lieberman – Nov 19, 2020

SuperStreetOnline
What We Know About the Upcoming 2022 Honda Civic Type R
Rodrez of Super Street: Did you get the “looks like an Accord, ILX, TLX, Audi, Jetta, Camry, Corolla, Charger” out of your system upon the debut of the 11th gen., 2022 Honda Civic prototype? Ok, cool. Let’s get down to what everyone’s been asking since Honda’s late evening launch of the upcoming Civic family this
Alex Nishimoto – Nov 19, 2020

SuperStreetOnline
Next Generation Subaru BRZ Debuts
At the end of the day, it’s all about perception. In enthusiast circles, Subaru is supposed to be one of just two current car brands that champions the horizontally opposed power plant, in addition to AWD layouts and turbocharging. By design, its BRZ naturally aspirated RWD coupe jointly developed with Toyota is going to be
Bob Hernandez – Nov 18, 2020