The baddest Lexus RCF drift car has just been built in the Middle East.

When Lexus debuted the RC F in 2014 at the Detroit Auto Show, performance car fans were hopeful, journalists were skeptical and Toyota/Lexus fans were simply appreciative for a sports coupe with some balls. The RC F went up to bat against players like the BMW M4 and Audi RS5, which, as you can guess, didn't win many battles on the drag strip and track; however, that didn't mean that the Lexus was a wimp, either. 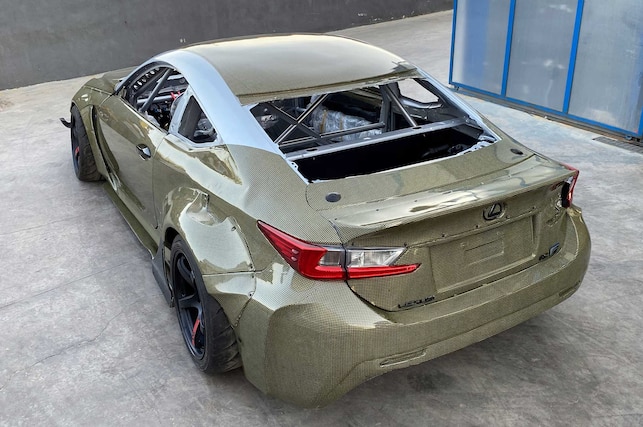 In a growing world of turbochargers and hybrids, Lexus kept things old school and maintained the same 5.0-liter 2UR-GSE V8 engine that was used in the discontinued IS F (also powers the GS F and LC 500). With 467hp and 389 lb-ft of torque powering the rear wheels via an eight-speed automatic, the RC F was still fast and pretty damn fun to drive. Unfortunately, it was a heavy coupe weighing in at around 4,000lbs, but still managed a 4.3-second 0-60mph (as tested by MotorTrend on a 2015 model). When it came to maneuvering around the track, there was no question the Lexus coupe was a heavy piece of metal compared to other sports cars out there, which explains why you didn't see too many at grassroots events. But in the competitive motorsport world, we did witness some GT3 and Super GT examples out there competing with the big boys from Porsche, and today we celebrate a new player that's eager to go toe-to-toe in professional drift.

INTRODUCING THE MOST ADVANCED LEXUS DRIFT CAR IN HISTORY

Last week, an interesting e-mail landed in my inbox that caught my attention with the tagline, "most powerful, most advanced Lexus drift car on the planet." After watching the attached video, sure enough, this was the baddest modern-day Lexus I've ever seen as I watched this widebody RC F slide around freshly paved desert roads. Upon learning more about the car and its driver, I realized this insane machine lived halfway across the world in the United Arab Emirates. A huge bummer because I'll probably never get a chance to see it in real life, but nonetheless, thanks to the internet I'm happy to share the juicy details behind this balls-out 2019 Lexus RC F. 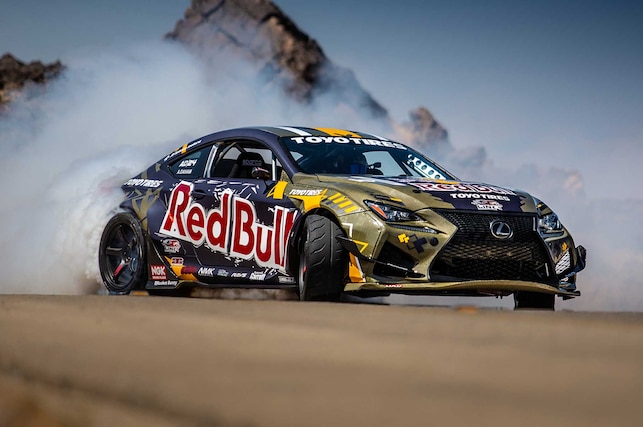 Before diving into the car, it's probably a good idea to give you some context behind Ahmad Daham, one of the Middle East's most famous wheelmen. Professionally driving for the last nine years, he's backed by Red Bull and has been called "Jordan's Drift King". Ahmad holds many titles under his belt including most recently, a 1st place at the 2018 and 2019 Emirates Drift Championships. In 2014, he set the Guinness World Record for the longest twin drift at 28.52 kilometers (17.72 miles) alongside someone you might have heard of; James Deane. Guess it was only fitting Ahmad would be the pilot of this groundbreaking RC F drift car that's about to make headlines around the global drift community.

You don't have to be a gearhead or mechanic to know what makes a car go faster—add more horsepower and lose as much weight as you can. Of course, it's a lot easier said than done. Finding the right balance is even more difficult to do with a platform and engine that wasn't engineered to be a turnkey track star from birth, much like the RC F. It takes a lot of R&D and a big budget, which, thankfully this drift build had. 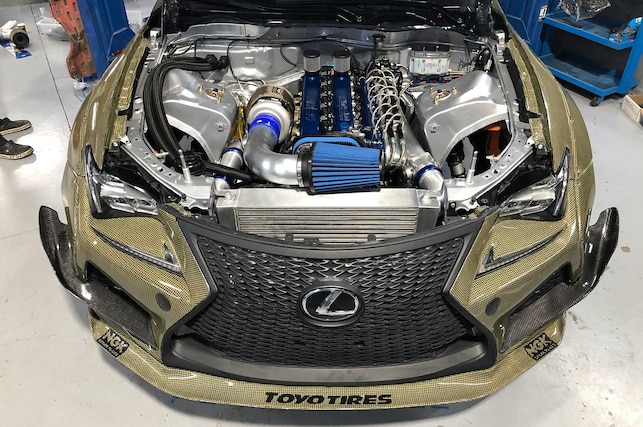 Don't get us wrong, the V8 in the RC F is a heavy-duty engine, sounds like Mufasa, but was it the right motor to utilize for this race car? Not many shops or people have developed the 2UR-GSE into anything competitive (at least in drift), nor were there parts readily available like GM's LS V8 or Toyota's 2JZ. Keeping it in the Toyota family, Ahmad decided to go the tried-and-true route of swapping in the venerable 2JZ-GTE (of course made famous by the Mk4 Supra Turbo).

The iron-block and bulletproof 2JZ was prepped and spec'd for 1,000+hp, which, quite frankly is the bare minimum if you want to be anywhere near competitive in drifting today. The 3.0-liter straight-six was able to achieve 1,200hp with 10:1 compression. The bottom-end consists of CP pistons, Brian Crower rods and a lightweight crankshaft, all assembled by NMK Performance. Up top, GSC Power Division came to the rescue by putting together a stout valvetrain using Brian Crower springs, retainers and valves, race-spec cams and a stage 4 head. More top-end power improvements are on hand thanks to a Hypertune intake manifold and a Garrett GTX3584RS turbo that thrusts enough boost to achieve those triple-digit speed drifts.

Fuel is an essential component to address, which is why a triple-pump fuel system from Radium Engineering was fitted, while upgrades like a Titan Motorsport dry sump and rear-mounted radiator system keep the 2JZ lubricated and cool. Lastly, Ahmad installed a Nitrous Express kit to help spool the turbo at lower rpms and better cool the intake charge. Everything is controlled via a Link Thunder ECU, and all that energy is transferred to spin the rear 285-series Toyo R888 tires via a Samsonas sequential and Winters quick-change diff. 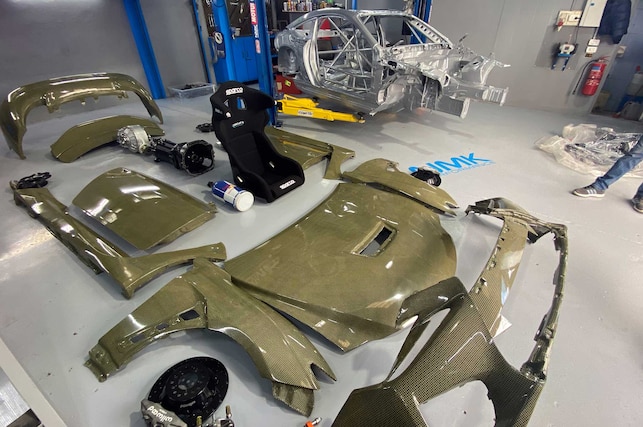 With the powertrain locked in, it was time address overall weight. Stripping out the entire car of everything that was unnecessary is a given, but the use of carbon-Kevlar is quite unheard of in the automotive world. Kevlar is lighter and more durable than carbon fiber; however, more costly. Ahmad spared no expense, having all the doors, body kit, bumpers and roof fabricated locally. The Kevlar-wearing RC F officially registers at 2,755 lbs, which is a monster reduction in weight. The current 2020 RC F at your local dealership weighs 3,902 lbs. Ahmad's car is also lighter than the 2,866 lbs RC F GT3 as seen in the IMSA series.

FIA DRIFT-SPEC AND READY TO RIP

The remainder of the Lexus drift car includes a mix of one-off custom parts and help from international players. The FIA-approved rollcage was all built in Jordan—that goes for the rear-mounted cooling setup as well. Winters Performance not only provided the quick-change but also beefier axles and a carbon driveshaft. To help minimize unsprung mass, the team chose Wilwood brakes, while custom three-way BC coilovers and a FIGS Engineering angle kit (the very first angle kit for the RC F) assist the handling and steering duties. On all four corners are five-spoke Gram Lights 57CR wheels which complement the car's styling well. Inside, there's not much else to identify minus the matching Kevlar seat made by Sparco, along with matching steering wheel and a Tilton pedal assembly. 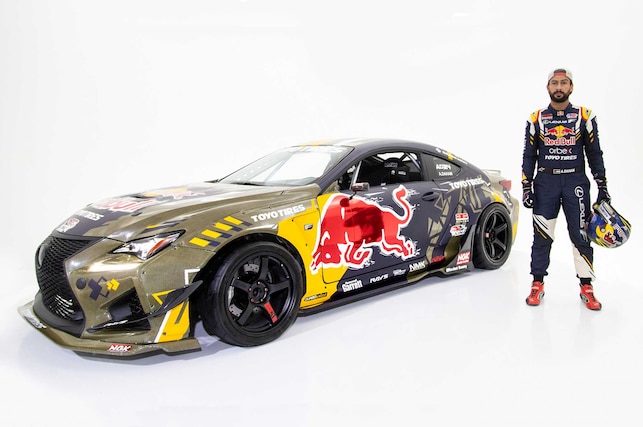 WHAT'S NEXT FOR AHMAD AND HIS RC F

Ahmad's road toward building this RC F hasn't been the easiest. It started in January and just wrapped up last month with fine-tuning and adjustments still being made at the car's first shakedown during the video shoot. Fabricators, mechanics and developers have all been delayed due to the Covid-19 pandemic; however, with the cancellation of scheduled competitions, the project was able to come to fruition and future plans are to campaign the RC F in a big way for 2021. So far Ahmad has confirmed the following: UAE Drift Championship, Oman International Drift Championship, Drift Masters Europe Championship and Goodwood Festival of Speed. There are open invitations to the International Drift Championship in Japan as well as Formula DRIFT here in the States. Our fingers are crossed...