The History of the Honda CR-V

Not really a car, not really an SUV, but rather Honda's "Comfortable Runabout Vehicle"

Rodrez: Back in 1997, well before it became a Honda enthusiasts "sidepiece" daily or nothing more than a carcass after having any and all of its AWD DNA picked clean by salvage yard regulars, the Honda CR-V debuted as a pretty big deal for Honda. To some, it was essentially a bloated Civic that sported the versatility, user-friendly driving experience and reliability of the now 10 generations deep Honda staple, while for others, it helped usher in an era of crossovers that seemed to pick up steam in later years, even while the behemoth SUV market began really focusing its market domination in the U.S. 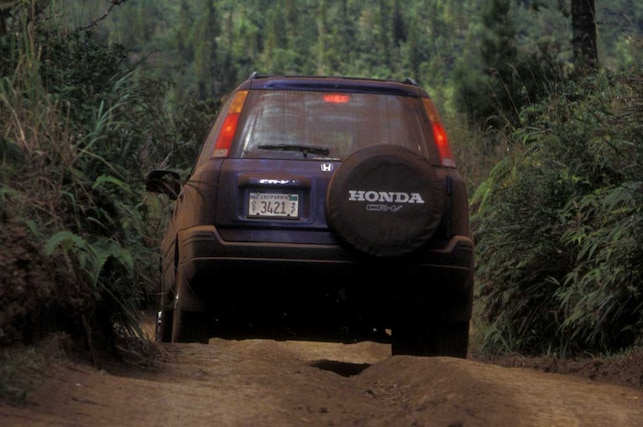 Today, finding an old CR-V isn't a difficult proposition—given you're willing to settle for FWD and/or automatic, or go on an all-out hunt for that manual AWD offering. It's also not unusual to find a number of modified versions. Though most didn't catch the mod bug during its initial launch, as the 1st generation CR-V continued to age, it brought with it a group of 3rd and even 4th owners who were faced with a decision: lifted or lowered. We've seen a fair amount of both, and it seems that whichever route is chosen, it's always made better by a VTEC head and/or boost and, in more recent years, K-swaps. The second-generation model saw K-power right from the factory, though they're not nearly as common to modify as their older siblings, but that may change as the years continue stacking up.

Alexander Stoklosa: The Honda CR-V is so common today, its numbers so thick on the ground in most places, that you've probably never stopped to consider what the compact crossover's name means—or that it means anything at all. As a standout member of a mostly drab segment, the Honda's name could just be the same old alphanumeric mumbo-jumbo applied to any number of modern vehicles. But did you know that it actually means "Comfortable Runabout Vehicle"? The funky name reflects the newness of what the CR-V represented back in the mid-1990s: there literally wasn't a term for what it was, so Honda made one up. 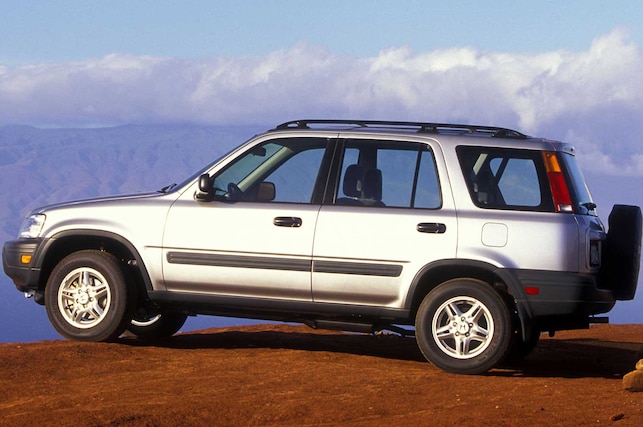 Among the first of a new kind of in-between vehicles (not quite a car, but not quite an SUV), the Honda, and others like it, would sometimes be called "soft-roaders" before eventually going by the "crossover" name. Whatever you call them, the CR-V was on the vanguard of a rapidly proliferating number of tall, car-based, wagon-like vehicles that Americans just can't get enough of. The Honda CR-V's blend of an endearingly SUV-like shape—right down to its little externally mounted spare tire bolted to the tailgate—carlike handling, and fuel economy helped establish the crossover formula (alongside the truly first-into-the-fray Toyota RAV4, which was introduced a few years earlier).

Now, the CR-V and other crossovers like it didn't appear out of thin air; Japanese automakers had for years been toying with literal car-based, all-road vehicles such as the Civic 4WD Wagon, Subaru Justy, and Toyota Corolla All-Trac. Honda, like Toyota with the RAV4 and Subaru with the Forester, simply swapped an SUV-mimicking body atop fortified car mechanicals to create the CR-V.

Honda first debuted the CR-V back in 1995, but the brand wouldn't send it to the U.S. until the 1997 model year. It is heavily based on the contemporary Civic, and the crossover sports a fully independent suspension and a flat interior floor. Honda's stylists gave the CR-V a mini-SUV appearance, with an up-kicked front bumper that resembles a skid plate and a cute externally mounted spare tire hung on the swing-out tailgate. Weirdly, at least for the American market, the CR-V's tailgate swings open to the right—toward the curb. As such, when owners need to walk around the open tailgate to reach the sidewalk. At least the tailgate glass opens separately, swinging up and out of the way for quick deposits of groceries or bags. 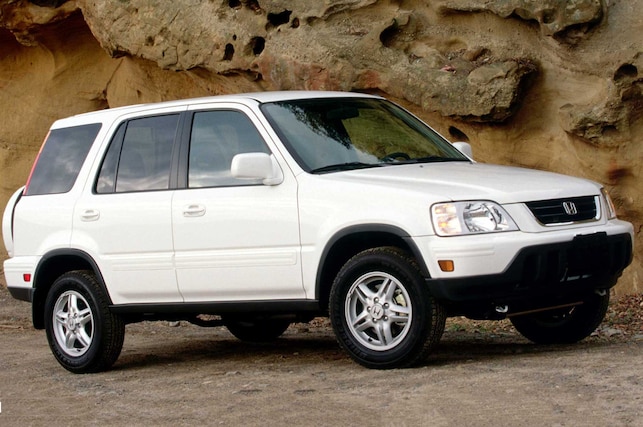 At first, only a single trim level was offered—the CR-V LX—but shortly after its first year on sale, the EX joined the lineup. The higher-end trim adds aluminum wheels and anti-lock brakes to the model. Every CR-V comes with a picnic table (no, really), that deploys from beneath the cargo floor. The rear seats also fold flat, and there is plenty of bin space throughout the interior.

Other cute details include a column shifter for the automatic transmission, a flimsy folding console between the two front seats, and taillights integrated into the rearmost roof pillars, leaving unadorned sheet metal between the bumper and the rear glass. For reasons unclear, Honda stuffed the majority of the CR-V's secondary controls into a panel to the left of the steering wheel, including the door mirror controls, window switches for all four windows, and gauge-pod dimmer switch.

In the late 1990s, most SUVs relied on truck-like body-on-frame underpinnings, making them heavy and ponderous on the highway. The CR-V, on the other hand, is more like a tall station wagon. As with other period Hondas, its body boasts a low shoulder line and a tall greenhouse, so there is plenty of glass to aid outward visibility. If not for its higher-than-a-Civic seating position, the CR-V feels almost exactly like a car from the driver's perspective. 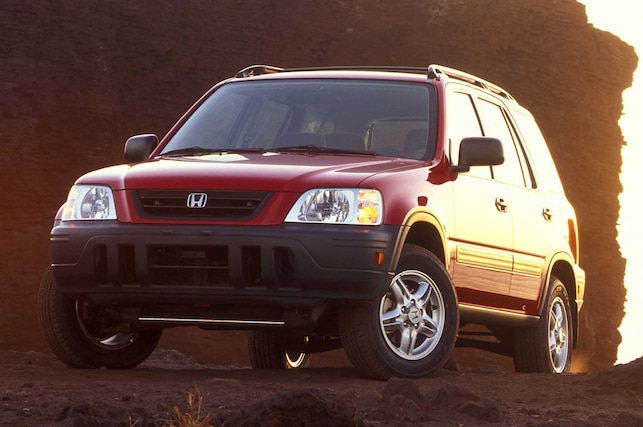 While not a car, neither is the CR-V an SUV in the traditional sense. Front-wheel drive is standard, and even Honda's optional "Real Time" all-wheel-drive favors the front axle. When slippage is detected at the front wheels, the setup shifts engine torque to the rear axle—although not quite in the "Real Time" Honda branding suggested, but close. With 8.1 inches of ground clearance, the CR-V is certainly better suited to off-roading than a Civic, but its lack of low-range gearing or a lockable center diff meant it prefers the pavement to the unbeaten path.

Light as the CR-V is, it doesn't need a great big engine to slog it around. Honda fitted every CR-V with the same 2.0-liter four-cylinder engine; initially, the motor produced a so-so 126 hp and came only with a four-speed automatic transmission. In 1999, however, that output was bumped up to 146 horses, and buyers could choose between a five-speed manual transmission or the four-speed auto. Acceleration with either transmission is leisurely compared to today's CR-V and its ilk, but competitive at the time. Fuel economy was similarly impressive then, if not now; the original CR-V posted low-20-mpg efficiency.

No one thing gave the CR-V its magic appeal. It was the blend of all of its friendly attributes—from its useful and roomy interior to its carlike driving behavior to its affordability (around $20,000)—that earned it adherents. Sales quickly topped six figures in the U.S. Stir in Honda's reputation for reliability, and its little wonder the CR-V gained enough longevity to help put the crossover formula on the map. Not only can you still buy a CR-V today (it is Honda's best-seller in the U.S. ), but nearly every SUV-ish thing on the road relies on the same basic format of car-like underpinnings with SUV-like looks. It's called a crossover, but in 1997, it was the Comfortable Runabout Vehicle. 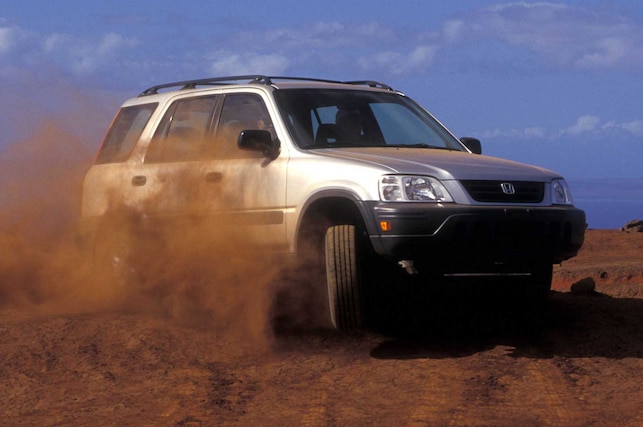 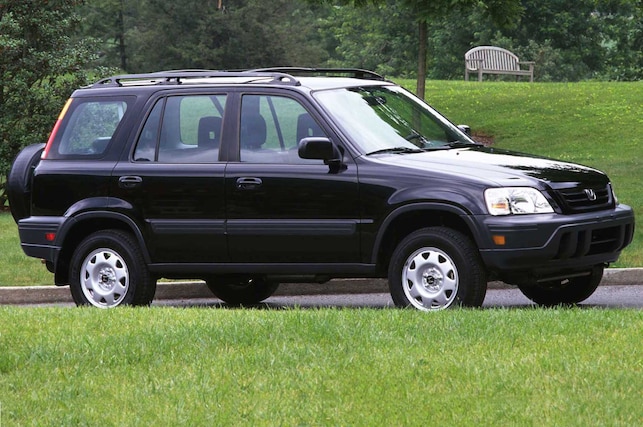 The History of the Honda CR-V
Photo /

Honda Tuning
Video of Mercedes-AMG GT Black Series Terrorizing Nurburgring
Rodrez: It’s the measuring stick that offers as much speculation and attempts to discredit driver achievement as it does real-world data and raw, obsessively focused attempts to chip away at the clock. The Nurburgring serves as a standard by which most automakers set their sights. It arms internet debate specialists with numbers and comparisons by
Nick Yekikian – Nov 21, 2020

Honda Tuning
Supercharged OEM-Plus 2008 Acura TSX Street & Track Car
It’s safe to say that Angel Pena, owner of this supercharged 2008 Acura TSX, has a “type.” Having been enamored with Acura’s entry-level sedan ever since it was first introduced, he knew right away he’d get his hands on one, and eventually, he did just that. Today, a decade later, he’s moved on to his
Rodrez – Nov 21, 2020

Honda Tuning
Riding Shotgun In The New 2022 Subaru BRZ
Rodrez of Super Street: If the “swoosh” of the front fenders and pontoon-like sideskirts bolted to a FR platform that promises a sporty experience from behind the wheel doesn’t scream “turbo” then we don’t know what does. No matter what we think, Subaru’s 2022 BRZ, unveiled this week in its final form, isn’t packing the
Jonny Lieberman – Nov 19, 2020

Honda Tuning
What We Know About the Upcoming 2022 Honda Civic Type R
Rodrez of Super Street: Did you get the “looks like an Accord, ILX, TLX, Audi, Jetta, Camry, Corolla, Charger” out of your system upon the debut of the 11th gen., 2022 Honda Civic prototype? Ok, cool. Let’s get down to what everyone’s been asking since Honda’s late evening launch of the upcoming Civic family this
Alex Nishimoto – Nov 19, 2020

Honda Tuning
Next Generation Subaru BRZ Debuts
At the end of the day, it’s all about perception. In enthusiast circles, Subaru is supposed to be one of just two current car brands that champions the horizontally opposed power plant, in addition to AWD layouts and turbocharging. By design, its BRZ naturally aspirated RWD coupe jointly developed with Toyota is going to be
Bob Hernandez – Nov 18, 2020