Home  |  Features  |  Do JDM Honda Wheels Belong On A Porsche 911? Hell yeah!
Subscribe to the Free

Do JDM Honda Wheels Belong On A Porsche 911? Hell yeah! 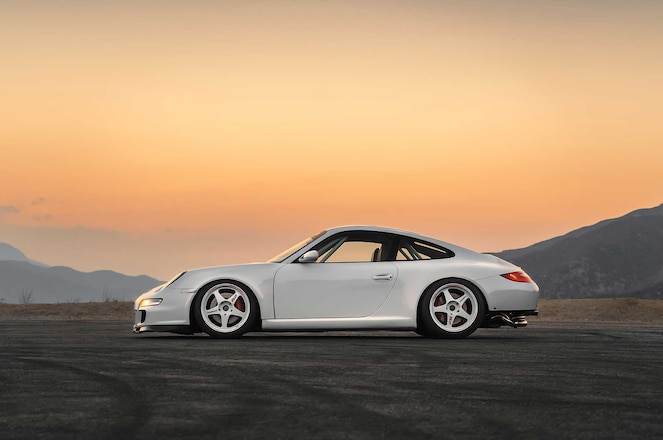 Jessy Villaruz could've easily put a set of BBS wheels on his 2006 Porsche 911 Carrera S, but he didn't. He picked the most unlikely wheel possible for his project car. A wheel most veteran Porsche guys probably have never heard of, however, a wheel that resonates with you and I. The Desmond Regamaster—a simple, flat, lightweight five-spoke wheel that's been commonly found on many legit Honda builds in 15, 16- and 17-inch fitments since its birth in 1996. Originally manufactured in Russia, production has since shifted to Japan by a company called Taneisya, and the iconic wheel has been reborn with the forged 6061 aluminum Regamaster EVO II, this time with more fitments, sizes, larger lip options and official stickers to complete the look. 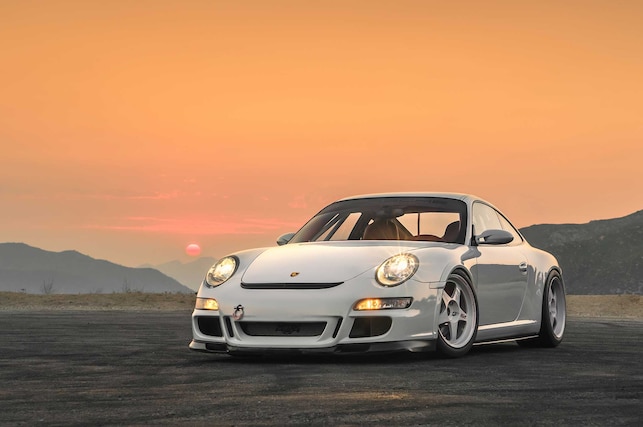 Now you're probably asking yourself, "Did they really make Regas for a Porsche?" Well, they didn't, and that's what makes Jessy's rear-wheel-drive 997 so damn unique. They're custom widened and redrilled to fit. Born and raised a Honda guy, he's never lost sight of his roots, so when it came time to cop a new set of shoes for his five-year long 911 project, he decided to go the road that no other Porsche owner has gone before while giving a nod to the Honda community in which he spent so many years of his life.

Aside from the fresh kicks, Jessy's got some killer additions that'll make you drool (as we did): the red double-stitched leather interior is stunning, especially for the reupholstered Cup steering wheel and Recaro seats. The color-matched eight-point rollcage is taken from an actual competitive racecar in the GT3 Cup series. There's also the wildly cut rear bumper to reveal the beautiful assortment of pipes orchestrated by Wisecraft Fabrication. It's artistic yet awesomely rebellious. 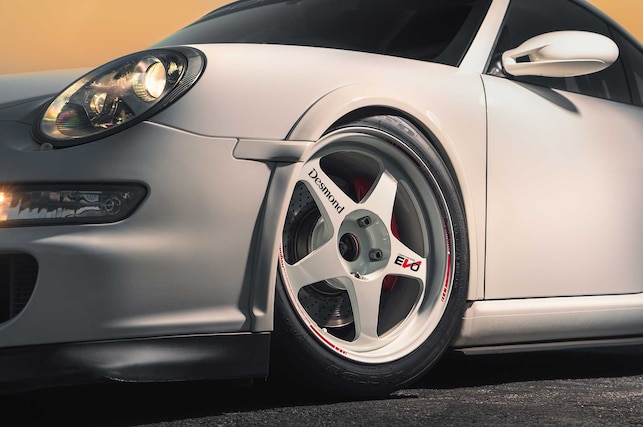 Unlike most Porsche purists and track junkies, you won't find Jessy at the next Porsche Club of America mixer or race. He's built his 911 purely to cruise it on the streets of LA and enjoy it with good company. That goes for whether you're a Euro guy or a deep-down Honda fan, like Jessy.

1-ON-1 INTERVIEW WITH JESSY VILLARUZ

What's up Jessy! Let's get started with what your background is with modified cars?

I was at the very impressionable age of 12 when I found that I really, and I mean really liked helping my dad fix and build his Hondas. It started out with me just helping him by grabbing whatever tool he needed, then it turned into where any free time he had was used to fix up his cars. I just followed suit. During that particular time, he was fixing up his 1996 Civic Coupe; it was also at that same time my dad handed over his 1985 CRX to me, all while I was only 12 years old! I guess you could say that this was where it all started. The idea of modifying a car stuck, and the rest is history. Honda was definitely my first love and where my love and appreciation for cars started; in fact, I actually have an EG project I'm working on now, but that's another story... 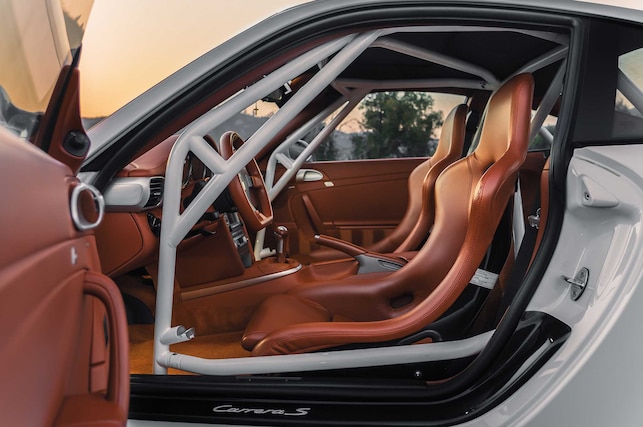 How'd you end up choosing the Porsche 911 as a project car?

Let's just say that the Porsche wasn't necessarily my dream car, but once I saw the interior, it was a done deal. I purchased it in October 2015, so nearly five years now. My mind was set on building it with a track style.

The big question is the wheels... Why'd you pick Regamasters of all things for a Porsche?!

I like to do things that no one has done or attempted to have done on cars, and Regamasters were always my favorite wheels in the Honda scene when I was younger. So, I just thought, "why not?" 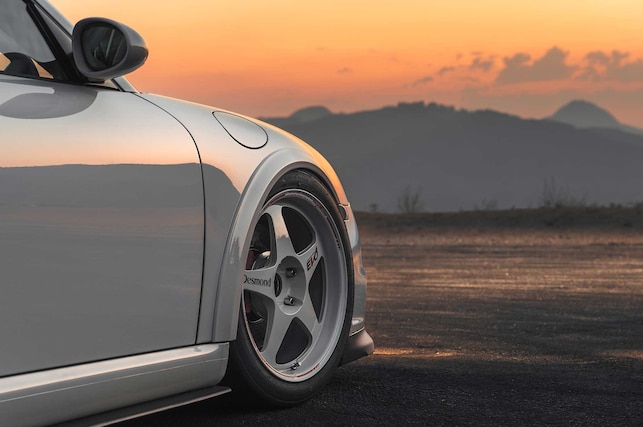 And how'd you make 'em fit?

Personally, I just had the vision. I have a wheel builder and told him the idea, and he was able to help my vision come to fruition in Porsche specifications. This basically means he was able to have them filled and redrilled to 5x130.

I don't believe the EVO II comes in a 18x12-inch fitment!

18x10-inch was the widest they came so my rears have been widened to 12-inches and some change.

Nice! The interior is pretty nuts, too, with all the upholstery to match. As I recall, the rollcage is one of the rarer parts on the car?

Yes, the person I bought it from used to race for GMG. I was told that this eight-point rollcage was made specifically for their race cars, so I bought it with no hesitation. 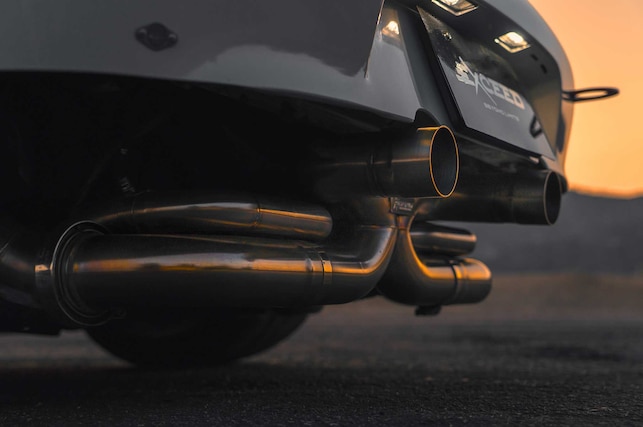 What are some of the other highlight parts that set your 911 apart?

Really, it's just the wheels, rollcage and exhaust, which was custom built by Chris Vuong from Wisecraft Fabrication in August 2018. The headers are made out of 321 stainless, cut to equal length with a slip-on collector. Exhaust is made out of 304 stainless and drone tubes were added to reduce drone. It was actually Chris' first time doing a symmetrical exhaust and he did a damn good job!

I'm not a huge fan of cut rear bumpers but yours seems to flow nicely! What's next for the car?

Well, I have a VF supercharger that I haven't installed yet, but we'll see how that goes.

Can't wait to hear the car when that's done!

In this photo set by Renz Dimaandal, you'll also notice my A90 Supra along with another Porsche rocking a set of JDM wheels. Lance Feliciano is a longtime friend of the Super Street family and he's the one who helped us get in touch with Jessy. He's also a former JDM superfan and aspiring drifter turned Euro owner that hasn't forgotten his roots. His 2008 911 Carrera S rocks 18x9" front, 18x12" rear Advan TC3 wheels powdercoated the same bronze found on the Volk Racing TE37 and wrapped in Nitto R888 tires. Other modifications include H&R lowering springs, a GT3 997.2 front bumper, Cup lip and Inozetek Army Green wrap. It looks surprisingly sexy in that green, and we can't thank him enough for his continued support of Super Street!

ALL THE RAGE FOR REGAMASTERS