Custom widebody Lexus LC on air ride will make you drool for days. 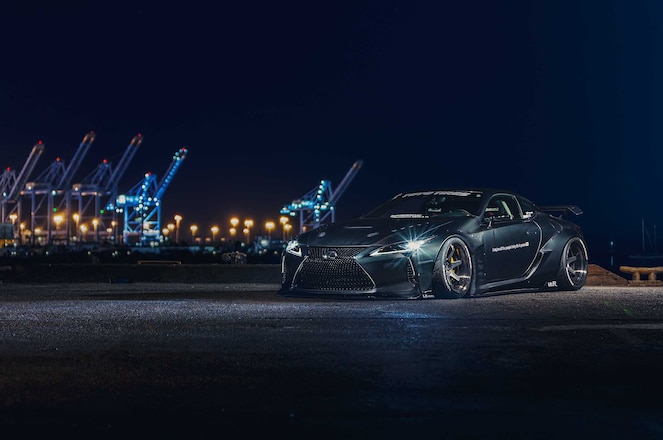 It's hard to believe the Lexus LC has been on the streets for three years now. I originally reviewed the car in 2017 and immediately fell in love with the plush rear-wheel-drive sports coupe. It wasn't going to be a weekend track car or 911 killer, but if looks could kill, the LC was a serial killer. Its design was groundbreaking, not just for Lexus but for the industry as a whole—wide, pronounced fenders, a low sexy profile and an elongated hood. Fine weaves of carbon fiber are sprinkled throughout, for example, the roof, while the interior feels more like a millionaire's living room, using only high-end materials. Contrary to many of its competitors, Lexus engineers decided to equip a naturally aspirated V-8 under the hood that summons 471hp and goes 0-60mph in 4.4-seconds. It's not lightning-quick due to its weight (over 4,000 lbs), but it's not a slug by any means and its low roar is fearless.

I've probably spent the most hours in an LC, having piloted the Lexus Tuned Artisan widebody across America in the 2018 Gold Rush Rally, and it's every bit as comfortable on a long journey as it is to go full throttle up an on-ramp or through some backroad twisties. Owning Lexus' flagship doesn't come cheap, though, with the 2020 LC 500 starting at $92,950, while spec'd out trim levels with options like the Torsen limited-slip and speed activated rear wing bump the price tag over $100K. At that sticker, we're talking about current model year 911 Carrera dollars. 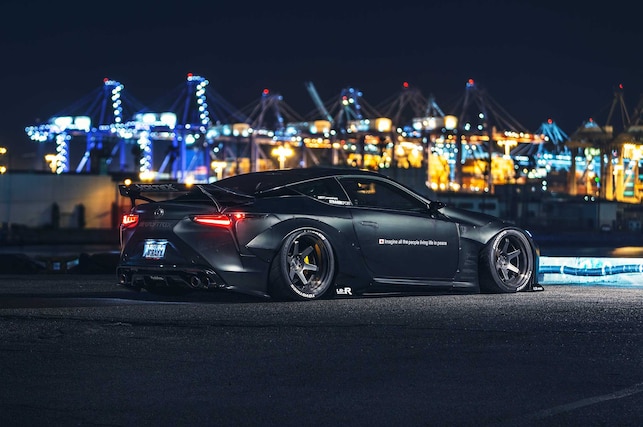 As you can imagine, it really takes a certain individual and mentality to break the norm and go against Porsche, a reputable German manufacturer that offers a much better performance car for the same price. For Jerald Yutadco, that didn't matter. The Los Angeles native saw an opportunity to pioneer a new project car and make a big statement at the 2019 SEMA Show and beyond.

FROM RC TO LC

Jerald is known mostly as "Jay Cray" to his friends and in the community. He's not just a visionary with project cars but also an up-and-coming videographer and audio technician, as you can see on his Instagram page. He fell in love with the Lexus brand after completing his previous build, a Lexus RC widened with Rocket Bunny aero, painted BMW Laguna Seca blue, and fitted with Work Meister L1 wheels. The car was a fan favorite in the Southern California show scene for a couple years before Jay Cray felt the urge to create something new. He parted ways with the RC and picked up this 2019 LC 500 brand new in November of 2018.

The ultimate goal was a SEMA debut and he had one full year until the next big convention, and to also sort out his game plan. Able to enjoy the car in stock form and even take it on a track day at Buttonwillow Raceway, it finally came time to put his $90K investment under the knife, which is not an easy task by any means.

With a proven Lexus RC show car under his belt, Jay Cray knew he wanted the LC to share the styling cues, but on a higher level. And since Artisan Spirit had already been kilin' it with Gordon Ting's pair of LC 500s, Jay Cray had to find his own path, which is why he decided to put together the first Liberty Walk widebody LC in America. 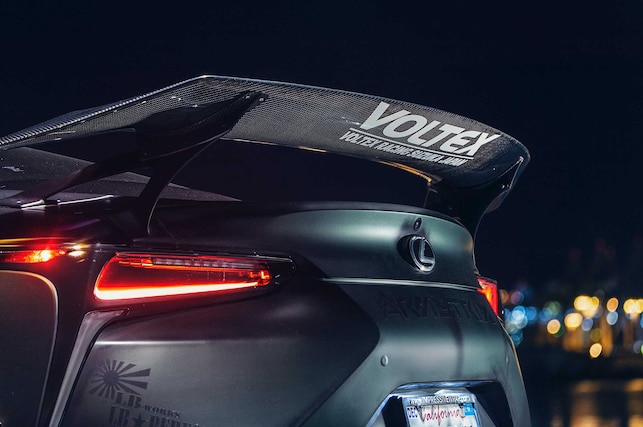 Now if you don't know much about Liberty Walk, then you've probably been living in isolation for at least a decade. Based in Nagoya, Japan and founded by the eccentric Wataru Kato in 2018, Liberty Walk hit the scene hard in 2012 and 2013 when the company dropped the hammer with its widebody Lamborghini Murcielago, Ferrari 458 and Nissan GT-R, all of which became Super Street cover cars. It was a time when the whole riveted/bolt-on widebody craze kicked into high gear. Today, we can all admit some of these conversions and kits are played out, but it would be silly not to respect how big of an impact Liberty Walk made and helped grow the scene, transforming many show and street cars, especially when it came to exciting vehicles like the Lexus LC.

Like every Liberty Walk, Rocket Bunny and RWB conversion, going wide means making a big sacrifice. You're going to have to come to terms with chopping up the stock fenders of your beautiful project car. In Jay Cray's case, he was going to have to cut off the hands and feet of his $90K Lexus for the sake of show business, but that's precisely what makes the nature of this build so special and its owner so courageous. Dubbed a version 2 kit, the LC widebody is comprised of four fenders, a more aggressive front lip, side skirts and rear valance. Out back, Jay Cray added a carbon fiber Voltex wing that's a collab piece with Artisan Spirt giving the Lexus a 'lil track-inspired flavor. Seibon developed a vented carbon hood next, and the last styling piece was the matte wrap that features jet fighter airbrushed graphics, all designed by artist Jon Sibal.

A widebody conversion is only as good as its stance and most of the Liberty Walk kits are designed for cars decked out to the ground. With this in mind, Jay Cray knew he couldn't simply lower it on springs or coilovers but needed the ride height adjustability of air suspension. For the Lexus LC, there aren't too many options on the market; however, suspension specialist T-Demand from Japan had developed air struts to replace the OEM equipment (which meant ditching the electronic adaptive dampers). Jay Cray picked them up, plus T-Demand's new front upper control arms and knuckles to dial in the camber while sourcing Air Lift's 3H management to control the entire system. The result is mind blowing. The front lip basically sits on the ground once fully aired out. Once the custom-made 20-inch forged Rotiform wheels with Toyo R888R tires were mounted, Jay Cray was well on his way to the sexiest LC 500 on the planet. 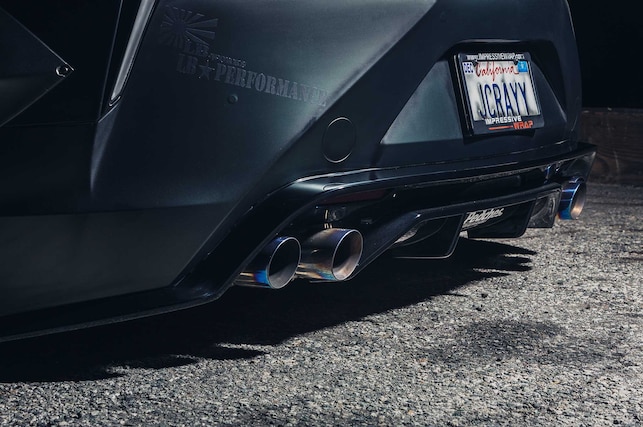 WAKE UP THE V8

One of my favorite components of the LC 500 is its V-8 powertrain that has quite the personality and a nice deep rumble. Since it's naturally-aspirated and already an efficient motor, it's really hard for tuners to squeeze out any additional horsepower, but there are a couple of things to wake up the 5.0-liter, especially its sound. Jay Cray installed equal-length PPE headers that improve bottom-end torque, and also installed a titanium Armytrix exhaust. He understands the performance gains are marginal at best, but the louder growl was just what he needed to be fully content with its overall presence on the road.

The stock interior of the LC is elegant from its comfortable sport seats and cutting-edge design but in order for Jay Cray to complete his vision, he knew he couldn't leave the cockpit untouched, especially with its wild exterior. He installed fixed buckets in the form of Bride Low Max carbon Kevlar seats, along with Takata harnesses. Studio RSR, who's based in Orange County, fabricated an extravagant rollcage for the rear that was painted white for a stark contrast. 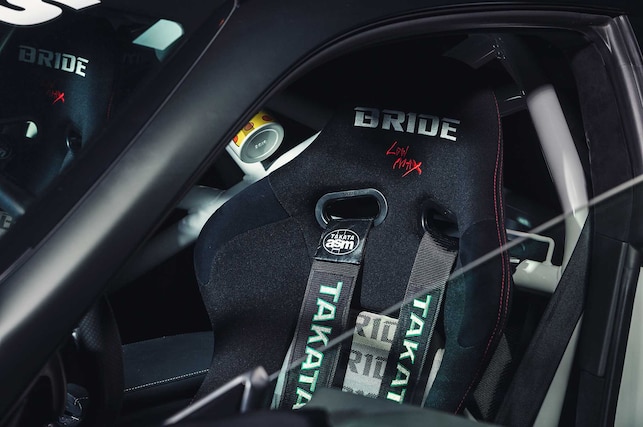 Jay Cray's Liberty Walk LC made its debut at SEMA 2019 in the elite Toyo Tires Treadpass. The car has since made a couple of other appearances including the Race Service x Lexus event leading up to the LA Auto Show.

As for what's next, despite the LC already coming with rather massive six-piston and four-piston brakes with 15.7" and 14.1" rotors, Jay Cray still wants to keep a track-inspired theme with a full set of Brembos which are on the to-do list. Thought this project isn't finished in his eyes, the rest of the world only needs one look to understand that this is the world's most attractive Lexus build today. But will it be for long? Low-mileage LC 500s are beginning to drop in price to around $60K, meaning we could see more enthusiasts take their turn on Lexus' flagship coupe. For now, though, our hands raise up for Jay Cray and his Liberty Walk labor of love.

RELATED STORIES TO CHECK OUT
Last November, Lexus confirmed the 2021 LC 500 convertible which is set to hit dealerships this summer.
Owner and founder of Liberty Walk, Wataru Kato's Kenmeri Skyline.
The second Liberty Walk GT-R we featured, owned by Bernado Pena that I was lucky enough to take on a Targa Trophy rally in 2014.

Is The Best-Ever Subaru STI Worth $63,995?
SuperStreetOnline features