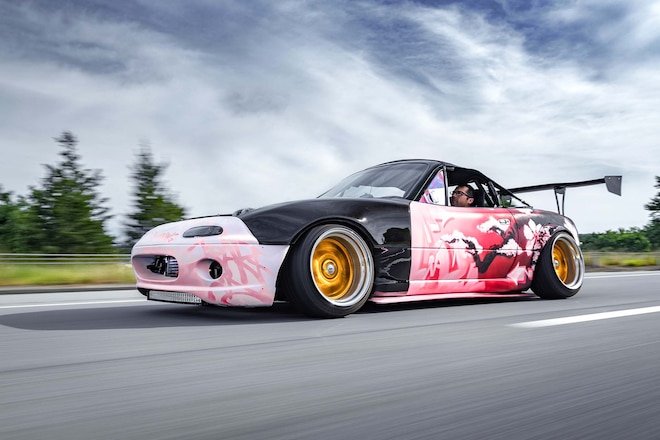 One of the useless things we learned in college was what a "red herring" was as it pertains to debate - it's basically something that misleads or distracts from a relevant or important question. It's a disruptive tactic meant to throw your opponent off in an argument, sorta like how the first thing you see of Martin Astromowicz's long-term 1990 Mazda Miata build might lead you to think the car is simply some over-the-top stanced out machine. That's only partly right; like an onion, there are layers to Martin's MX-5, and once you start to peel them back you realize this roadster is definitely not what it seems.

We bring up the point about using a red herring because that's literally who Martin is, Red Herring Photography, the same East Coast shooter who brought you Chris Cut's NSX "camper," Joe Huria's 10-second Gallant VR-4, Lester Donis's panda AE86, and others. All of those builds embraced a disruption to the usual aesthetic in one form or another, and Martin's first-gen. Miata is in the same vein; equal parts established tuning practice coupled with some unique approaches that you're allowed when you take a project car to this level.

Martin snagged his NA chassis Miata in '02, and originally it was supposed to get a completely different kind of engine swap than what it ended up with. Plan A was to squeeze a Ford 302 (4.9L) small block V-8 into the engine compartment and make it a drag car, but then something happened when Martin started to whip around the lightweight early-'90s roadster - he fell in love with the platform's renowned balance and award-winning handling (in spite of a busted exhaust, probably too big 17s, and a common crankshaft pulley wobble issue that had yet to present itself). With the aim of enhancing the MX-5's innate strengths, Martin started modifying in that direction. 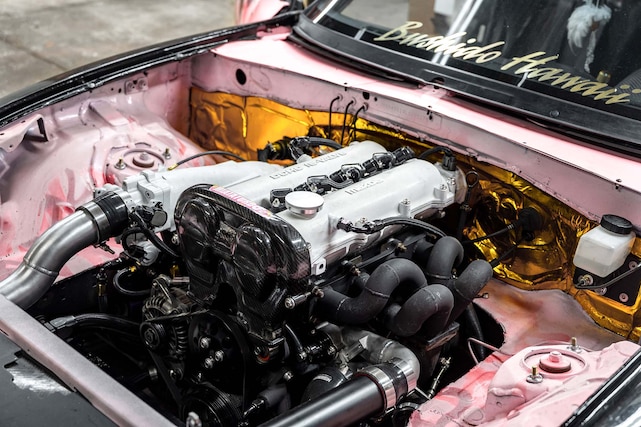 Sticking to a tried-and-true script, Martin started off simple: Tein Flex coilover suspension, Jackson Racing sway bars with Racing Beat sway bar braces, Wilwood big brakes, a cat-back exhaust, and some replica wheels. When work sent him to Hawaii for a stretch, he prepped the Miata to bring it with him, and that's when he discovered the dreaded crank wobble. A JDM 1.6L engine was quickly sourced and dropped in, and a day after the engine swap Martin and the car made the cross-country drive from Connecticut to California in three days.

New England to Hawaii Round Trips

In Oahu, Martin discovered autocross, the best low-speed fun you can have in a parking lot with a bunch of traffic cones (we kid! Don't email us). For the Miata, it meant stiffening up the chassis with upper strut tower braces, rollover protection, and Flyin' Miata frame rail braces and carbon. It also meant going on a diet; the factory soft top was completely removed, and Martin opted for the Axis Power Racing dry-carbon hard top, hood, trunk lid, rear fascia, and seats, an exercise that shaved off about 60 pounds. Martin kept the build going with another engine swap, this time 1.8L mill, and an improvised T3/T4 turbo setup with upgraded 550cc injectors to support the forced induction. Tuning the combo with a MegaSquirt gen. 1 ECU, he got a cool 210whp from the rear hubs, enough to make this 2,100lb. roadster a very good time.

Work switched gears again and Martin had to trade back the tropics for Connecticut, at the same time deciding to focus on the Mazda engine's power output and reliability. He pulled the engine, broke it down, had the block bored out 1mm, then rebuilt with the Supertech forged internals and 6-speed transmission; he also did the '99 MX-5 head swap with a ported and polished head. A set of subframes also from a '99 MX-5 went on the NA Miata, as did driveshaft, rear end, and axles. Then Martin's employer threw him another curveball and he was, once again, relocated to Hawaii.

We Were on a Break

For a period of about six years, Martin made little progress on the build. The Miata had developed a wicked fuel leak, and Martin was having to devote much of his focus to his job anyway, but he didn't stop picking up parts here and there and making modifications when he could. In this era, the owner got his hands on the carbon-fiber Autokonexion aero widebody kit, MegaSquirt 3 Pro, and the downturn ram-horn turbo manifold, but just as he was eying a comeback, he got word from bosses to pack up and return to Connecticut. The roadster was hastily thrown back together (naturally aspirated, even) and sent to New England.

Once back in the Northeast, Martin found a set of rare JDM multipiece SSR 265 wheels and had them redone to his specification. He also had the Miata resprayed, and swapped out the conventional coilovers for an air suspension.

The familiar itch to milk the engine for more power resurfaced, but after an oil test those desires changed somewhat, as the results indicated the engine had a spun bearing. Out came the 1.8 engine, torn apart again, and after being rebuilt, was outfitted with a BorgWarner 6758 turbo, ID 1050x injectors, and Skunk2 intake manifold and throttle body, in addition to a Boundary Engineering oil pump to hopefully prevent another catastrophe in the bottom end.

It's at this point, Martin's project car starts to evolve in new and interesting ways. While having a graffiti artist tag your car isn't necessarily a new thing, it always has the potential to go horribly wrong. Luckily for Martin, that's not what happened; facilitated by his good friend Chris @nsxtra, Martin handed over his Miata's keys to street artist Craze @refractualism to have him ply his creativity. The cherry blossom livery that splashes across the side of the Mazda is as intricate as it is vivid and seems to fit the roadster perfectly.

When the Miata came back from paint, Martin had help from fabricator Ryan "Woody" Hamilton @thatlsmiata to make final mods to the suspension and TDO Performance's Derek Seekins @the_defensive_octopus to sort out the exhaust and tucked cooling system. Then the owner took the car to Derek Burton, aka "the Miata Whisperer" (@bootlegburton), to get the roadster to make some real numbers, and each visit turned up a new problem to solve - but eventually, through persistence, they got to a more than respectable 341whp at 17psi of boost pressure.

Lest you quickly write off that number, remember this is a first-gen. Miata that weighs practically nothing. The prospect of all that power coursing through such a lightweight chassis is tantalizing, and Martin's not done yet. On tap are a full pressure tune with sights set on 400hp on pump gas and 500 on E85; Martin is also looking at more suspension tuning, meaty 275/35R15 tires, and lots of seat time. For as wild as this car came out, its Miata mystique and flowery exterior really are the red herring, distracting from what seems like a truly killer heart.