G'ed Up from the Feet Up: So-called Bimmer G80 sedan and G82 coupe look ready for some nose candy.

If the internet thought the Nissan Z Proto was a bit much to stomach, they're gonna get sick over the looks of the 2021 M3 and M4. But BMW keeps pushing the technological and styling limits of its beloved compact executive platforms, as our kin at Automobile discovered.

Talking about the BMW M3 is still a bit of a mind-bender for us nowadays, because we remember when all M3s were two-doors. Today, the M3 is a four-door sedan, while the M4 is the two-door coupe, but that's really the only difference. When the new 2021 BMW M3 arrives in dealerships in March 2021, it will of course have all of the same mechanical awesomeness as the M4. Happy days, my friends, happy days!

We're most excited about the powertrain lineup. The new 2021 BMW M3's TwinPower Turbo straight-six remains at 3.0 liters, but now boasts 473 horsepower (up 48) and the same 406 lb-ft of torque as the last M4. What really puts a smile on our face is that all of the power gets channeled to the rear axle—and only the rear axle—through a six-speed manual transmission.

Need more horses or fewer pedals? You'll want the 2021 BMW M3 Competition, which ups the output to 503 hp and 479 lb-ft, an increase of 59 and 73, respectively, compared to the outgoing M3 Competition. The price you pay for this power (besides an extra $2,900) is an eight-speed automatic transmission, but you do get to 60 mph in 3.8 seconds, according to BMW, which is 0.3-second quicker than the manual car (assuming the manual driver can shift gears quickly enough). Top speed is 155 mph, and the optional M Driver's Package ups that to 180. Said package also includes a voucher for BMW's driving school, so you can learn to use your car at such speeds.

Lest you think the sedan is for those who aren't fully committed, let us assure you that the M3 sedan shares all of the 2021 BMW M4's nifty goodies. Among them: Additional chassis bracing for the excellent new 3-Series platform on which it's built, lighter and more handling-focused suspension bits, and massive six-piston front brakes with two modes for pedal feel. BMW brags of having 10 stages for the stability-control program, presumably allowing the 2021 M3 to get nice and sideways while still having electronic protection in place. 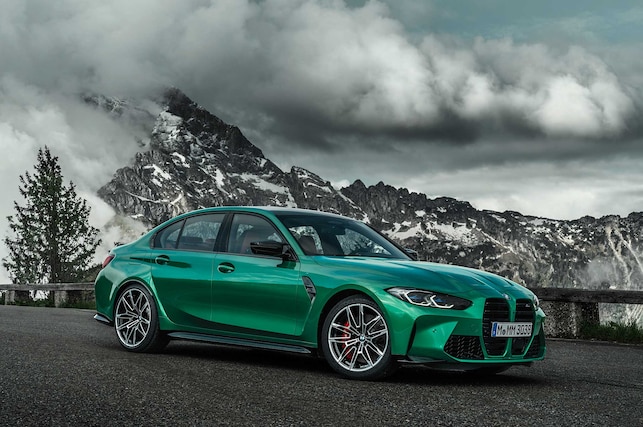 Speaking of getting sideways, we're intrigued by the xDrive all-wheel-drive system, which arrives in summer 2021. Available as an option on the M3 Competition, the xDrive system has three modes, one for normal driving, one that biases power to the rear for a sportier drive, and a third mode that runs the car in rear-wheel-drive only, and which requires stability control be shut off entirely. Wow.

One unexpected surprise is that the 2021 BMW M3 shares so many of its styling cues with the 2021 M4 coupe, up to and including the lightweight carbon-fiber roof. The M3 is slightly longer than the outgoing car (with a 1.8-inch wheelbase stretch), and it leads with the giant twin-kidney grille, which we have seen on the 4-Series coupe and really hoped to avoid here. As with the M4, its twin snouts stretch well back into the hood. Additional lower-grille space gives you some idea of the extent of the cooling system, which BMW says is designed to withstand the rigors of track use. With the same creases and extended rocker panels as the M4, it's almost possible to forget that the M3 has two spare doors. But in terms of the overall look, frankly our first impression is that we will never consider this M3's styling as appealing, let alone objectively attractive.

Inside, our first look at the 2021 BMW M3's interior reveals deeply bolstered seats that face the same basic dash layout found in regular 3-Series. An LCD dashboard is standard, as is a color head-up display. If you're actually lapping your M3 on a racetrack, you'll probably want the M Drive Professional feature, which not only times your laps but will watch for drifts and record their angle and duration. (It'll be a sad day for the world when the insurance adjusters get wind of that particular feature.)

Exterior appearance aside, there's a lot to be happy about here: a manual transmission, 500-plus horsepower, a no-compromises all-wheel-drive system—and the idea that you need not compromise on fun just because you're buying a four-door car. And that brings us to the best news of all: The four-door 2021 BMW M3 will be priced at $70,895 (including destination) for the manual-transmission model, and $73,795 for the Competition model. That's a discount of $1,900 off of the two-door M4, and a good excuse as any to start a family.

In a world full of misery, BMW has just given us something to look forward to in the form of the new 2021 M4 coupe—and unlike a vaccine, we know for sure when this cure for our malaise is coming. The happiest news: The 2021 BMW M4 will be available with a manual transmission, which comes paired with a 473 horsepower, 406-lb-ft version of BMW's 3.0 liter TwinPower Turbo straight-six engine.

The 2021 BMW M4 Competition model gets a 503 hp/479-lb-ft version of the same engine, which drives the rear wheels through an eight-speed M Steptronic automatic. For those keeping track, that's an increase of 48 hp (but no torque change) for the base engine, and 59 hp and 73 lb-ft for the Competition.

Similar to the 2021 BMW M3 the company unveiled simultaneously with the new M4, BMW estimates a 0-60-mph time of 4.1 seconds with the manual transmission, and 3.8 seconds for the Competition model. Top speed for both is 155 mph, rising to 180 with the optional M Driver's Package.

A high-performance cooling package, which includes an oil cooler for all M4s and a transmission cooler for the Competition, ensures the 2021 BMW M4 will keep its cool even with hard-core track usage. Flaps in the exhaust system can either modulate the noise or let the straight-six scream itself into oblivion.

And what of all-wheel drive? Yes, that's coming, too, as a late-availability option for 2021 BMW M4 Competition models. The three-mode xDrive system has normal and rear-biased modes, as well as a RWD mode that completely shuts off drive to the front wheels. (It requires stability control to be turned off as well, so if you're planning to go sideways, well, you're in luck.) 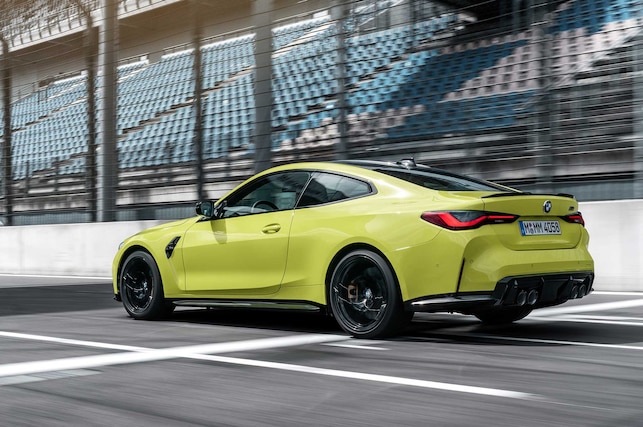 Given the massive improvements to the new 3-Series platform, we're especially eager to try out the new BMW M4 on the curves. Among the enhancements for M service: Additional chassis bracing, electronically controlled shocks, and suspension parts reworked for lighter weight and greater agility. Brakes have six-piston calipers at the front and single-pistons at the rear. Drivers can choose between two brake-pedal-feel modes, Comfort and Sport, our assumption being that the former mode will allow for more pedal travel while the latter gives a more immediate response. The stability-control system has 10 stages of adjustment, allowing the driver to get the M4 well out of shape while still having an electronic safety net in place.

And now for the one bit of bad news: The 2021 BMW M4 gets BMW's massive new twin-kidney grille, whose arrival we have dreaded on the new 2021 BMW 4-Series. This grille is flanked in its lower half by even more grilles, presumably to meet the M's massive cooling needs. The grille's twin-snout theme, which ends at the hood seam on the 4-Series, extends way back into the hood, with each snout topped by reverse-facing scoops. The body has all the scoops, swoops, flares, and fins you expect to see on an M car. The roof is made of carbon-fiber composite to save weight, and those who want a lighter car (and a lighter wallet) can specify an M Carbon package which includes carbon-fiber grille inlays, diffuser, rear spoiler, and mirror caps.

Aside from a few detail changes, the interior is pretty much what we've seen on the newest iteration of the 3-Series, with more aggressive racing-style seats and BMW's Live Cockpit Professional digital dashboard as standard equipment. A head-up display with M-specific screens is on the options list.

Among the electronic doodads is the new-for-2021 M Drive Professional, a track app that provides lap timing and the M Drift Analyzer. The latter records the duration, distance, and angle of your drifts, and it shows a rating on the display screen, which sounds to us a lot like the Insane Stunt Bonus in the Grand Theft Auto games.

European Car
Beyond the Bucket List: Riding Shotgun w/ Mario Andretti In A Turbocharged IndyCar Powered By Honda
Sam learns what it's like to experience triple digit speeds and extreme g-forces as he rides backseat with racing legend, Mario Andretti at the Indianapolis Motor Speedway
Sam Du – Oct 23, 2020

European Car
Revisiting The Long Lost 1972 Honda 1300 Coupe 9 GTL
The last car Soichiro Honda personally oversaw and the culmination of the career of one of the auto industry's most prolific icons.
Rodrez – Oct 22, 2020

European Car
Ferrari 550 Maranello V12 Race Car Built By legendary JDM GT-R Shop Relocates To Canada
This masterful project by Garage Saurus is breathtaking from head to toe, and it's only beginning to start its new life under the media spotlight, thanks to its new owner
Sam Du – Oct 22, 2020

European Car
Don't Try This At Home: Fire Breathing 500hp Mazda RX-7 Poses For Epic Photoshoot
They say, "a picture is worth a thousand words" and the photos we have of this 1997 RX-7 certainly lives up to the 'ol adage and more.
Sam Du – Oct 21, 2020