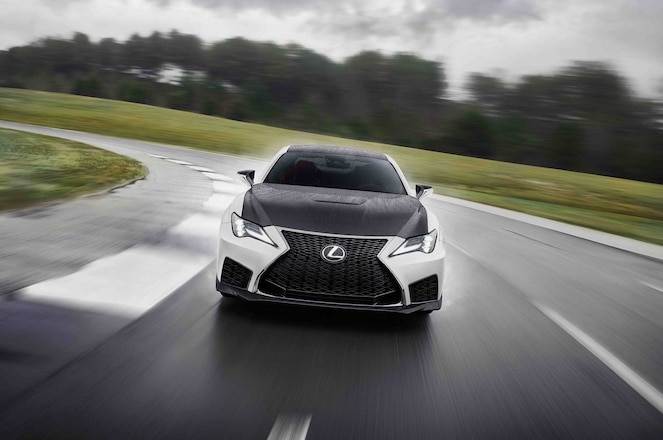 The Lexus RC F is a fine sports car with a solid ride and handling chops, but traditionally, its extra weight has made it slower than rivals. For 2020, Lexus introduced the lighter, quicker RC F Track Edition, but production was limited to just 50 units for the United States. Now, Lexus is recreating some of this performance magic with another limited-production RC F: the Fuji Speedway Edition. Along with the outgoing Track Edition's weight reductions, the new model adds a handful of unique design details to the Lexus performance coupe.

The 2021 Lexus RC F Fuji Speedway Edition is limited to just 60 units and packs on the carbon fiber to improve performance. It also benefits from a titanium exhaust and Brembo carbon-ceramic brakes. Lexus claims the special edition takes 4.0 seconds to hit 60 mph, matching its estimate for the Track Edition. For comparison, the standard RC F is estimated to reach 60 mph from a standstill in 4.2 seconds. Like the rest of the RC F lineup, the Fuji Speedway Edition features a 5.0-liter V-8 engine good for 472 hp and 395 lb-ft of torque.

Buyers can choose between two exterior colors: Cloudburst Gray and Arctic Blast Satin. The latter selection is a Lexus-first and consists of white paint with a satin luster. Inside the cabin, you'll find red carbon-fiber accents and red leather-trimmed seats with faux-suede accents. Purchasing this special edition also gets the owner a limited-production MSTR watch with red accents, as well as Fuji Speedway and F logos.

Lexus has also added a few goodies to the regular RC F, too. For 2021, the V-8 coupe gets a standard blind-spot monitoring system with rear cross-traffic alert, heated electrochromic exterior mirrors, driver's side memory seat, and Android Auto compatibility. A new satin trim can be found inside the cabin.

From the Editors of Super Street: Lexus's parent Toyota has owned Fuji Speedway since 2000 (indeed, the "F" in Lexus F is supposed to be a reference to the track) and the naming of the special-edition RC F might be tangentially part of a larger campaign to bring some acclaim back to the almost 60-year-old circuit. We've heard the facility will soon be undergoing some big improvements in order to transform it into a world-class racing destination, plans that include a motorsports village with luxury hotel, museum, and facilities for both teams and privateers.