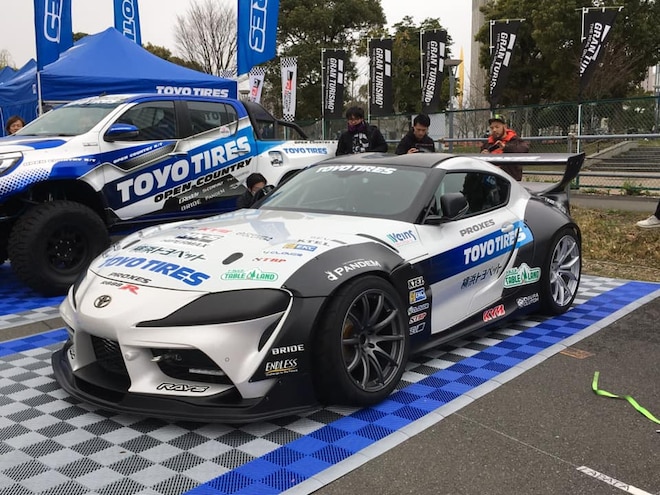 We expected fan bois would be triggered when drifting sensation Daigo Saito revealed earlier this month he’d be dropping a 2JZ-GTE turbo inline-6 – the mill from the venerated last-gen. Supra – into Toyota’s next entry in the lineup, the so-called A90, for the D1 Grand Prix All Star Shoot-Out exhibition in Tokyo recently. A segment of the audience may even argue that’s how it was meant to be. What we didn’t expect to see was a second drift-spec MkV among the event’s roster of challengers, the Toyo Tires Drift machine piloted FIA Intercontinental Drifting Cup champ Masato Kawabata.

There isn’t a ton in the way of information about the Toyo A90, save that – like Saito’s car – it has Wisefab suspension components, Endless brakes, a 2J under the hood and Pandem widebody kit all around. We hear it wasn’t allowed to demo for fans because of some sponsor BS, but we also understand the car wasn’t even ready anyway so it may have been there just for show (and then there’s the photo on D1’s Insta, which is completely confusing). It was very evident from other coverage we saw from the event that Toyota in Japan is making a full-court press in marketing this car to the enthusiast community, even in its own backyard.

As for Saito’s whip, it actually caught on fire during practice for the D1 pro drift exhibition but ‘twas a minor inconvenience (fuel system gremlins, we gathered), and it was back on track hours later. He’s released a pretty killer video since then, an edit that in its liner notes reveals the build took just 42 days.

Any realist knows these teething pains will likely continue for some time, especially with a platform that is still months from even being available to the public (we wanna know about the backdoor pipeline that led to these cars!) In the meantime, the D1 GP 2019 championship proper gets underway April 1st and 2nd in Tokyo – and you know everyone will be watching these two.