Has the world gone mad?! Targa top V-6 NA2 pulls in higher selling price than a V-12 Ferrari on Bring a Trailer.

After dumping plenty of money into Japanese cars most of our adult lives, it never occurred to us to that these things could one day be worth something. But that appears to be what some owners are experiencing these days, as vehicles from J brands seem to be fetching top dollar at a variety of collector auctions lately. We saw a 20-year-old Honda Civic Si sell for $50k back in June, and at this past weekend's RM Sotheby's Elkhart Collection sale a legendary '67 Toyota 2000GT went to a buyer for an amazing $912k. But our buddy Colin Frost from Big Country Labs tipped us off to another two sales going on concurrently at Bring a Trailer that had a somewhat similarly astonishing result—one a 2002 Acura NSX-T, and the other a 2002 Ferrari 575M Maranello.

The 18-year-old Targa-top Acura NA2 had just 10,000 miles on the odometer and one tiny spot of paint chipped off the roof. The similarly old Ferrari logged 14,000 miles and had rock chips on its nose. Both came from comparably small production runs, and the NSX had a MSRP of $89k in '02, while the original sticker for the 575M was in the neighborhood of $225k. So, color us surprised when the NSX sold for $120k while the Ferrari's highest bid was just $110k. Say what? 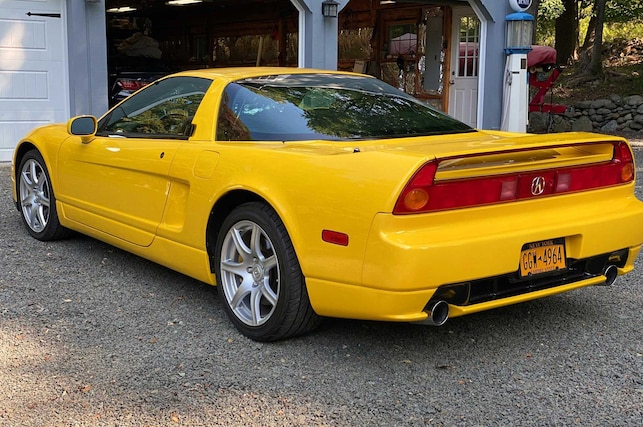 We must've read the description for each car a dozen times and still don't understand how the math adds up. Both are well cared for and pretty stock, but that seems to mean a lot more for the Maranello than it does for the NSX—perhaps illustrated best in each one's power plant; the mid-engine, RWD NA2 is motivated by a 290hp 3.2L V-6 engine, while the front engine, RWD Maranello is endowed with a 508hp 5.7L V-12. Both are 6 speeds, but the 575M's was a clutch-less manual transmission, plus the Ferrari featured a Fiorano handling package (stiffer rear sway bar, springs, and bushings and quicker steering ratio) as well as a Pininfarina-designed body. The NSX is good, and was even benchmarked against a Ferrari as its story goes (the 328, not the 575), but certainly not 575M Maranello good (sorry, Honda nerds).

We're starting to sound like a glitched recording, but it absolutely bears repeating; it is bonkers how people are shelling out the big bucks for primo Japanese collector cars. Like other performance J cars of the '80s and '90s, first-gen. NSX are going nowhere but up. Expect most clean NSXes (like this one) to hover above the six-figure mark for at least for the next decade.

Honda Tuning
Increased Horsepower and Torque from the Mighty AWD Toyota GR Yaris
The “most powerful 3-cylinder in the world,” applied to Toyota’s much talked about GR Yaris still sounds a little strange when you hear it, but you can’t deny the nasty 250+hp and over 260 lb-ft. of torque that are delivered through an eager AWD system, all packed into a relatively lightweight (by modern hatchback standards)
Rodrez – Jan 18, 2021

Honda Tuning
Time-Attack HKS GR Yaris vs. Tsukuba Circuit
As if to pour a little salt into the wound that the hottest hatch in ages, the AWD Toyota GR Yaris, is not being brought to North America, the interwebs has begun to conspire against us by teasing us with modified versions from some of the biggest tuners in the biz. In December, those sneak
Bob Hernandez – Jan 15, 2021

Honda Tuning
GT-R Importers Craft Sports JDM Opens Dealership in Florida
Wouldn’t it be cool if you could just go to a local dealership to buy a JDM hero car? Well, if you live in or around the Naples area in south Florida, that is now a reality. Craft Sports, the Nissan Skyline and GT-R specialty store and dealer that started in Gunma, Japan, recently opened
Bob Hernandez – Jan 14, 2021

Honda Tuning
World’s First Pandem Widebody 2020 Chevy Corvette 3LT Z51 Breaks All the Rules
Run down the entire list of modifications made to San Diego native Alex Lawn’s Pandem widebody 2020 Chevrolet Corvette C8 and it won’t take you very long to get to the end. Where you’ve often spent quite a bit of time sifting through various turbo trim numbers, engine internal specs and different JDM “doo-dads,” this
Rodrez – Jan 14, 2021

Honda Tuning
GM to Collab with Honda & Acura for Multiple EV SUV Options
Superstreet: If there’s one thing you guys hate with all of your soul, it’s the idea of OEM vehicle manufacturers teaming up with one another on new vehicle offerings, the way that GM and Honda/Acura have agreed upon. We’ve seen it with the Subaru and Toyota “86” experiment that was lit ablaze when first announced
Greg Fink – Jan 12, 2021