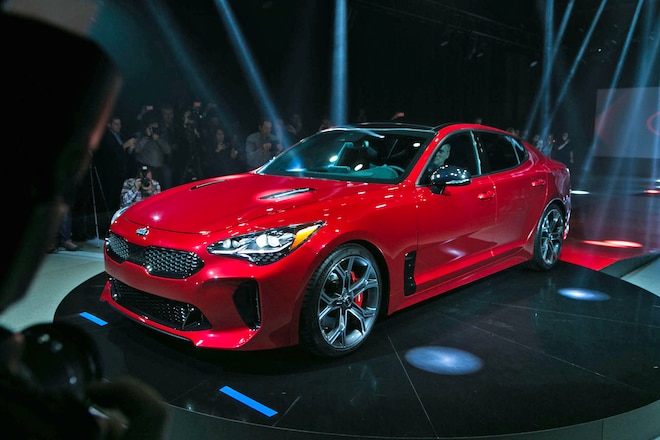 Stinger is the name, and hunting BMWs is the aim. Targeting the BMW 4 Series Gran Coupe, the Kia Stinger is a sexy, sporty five-passenger, five-door coupe that makes 365 horsepower in top-spec trim.

Although the name comes from the Stinger GT4 concept Kia showed at the 2014 Detroit auto show, the design is based on the Kia GT concept, which first appeared in 2011 in Geneva. The GT concept was styled by Peter Schreyer, who was the head of Kia design at the time, and the production car's design was led by Kia's European design chief, Gregory Guillaume.

Elements such as suicide doors and a winged front end were discarded, but details such as the notched windshield, the functional side vent, and the metallic arc that runs from the A-pillar to the rear deck were ported over.

Stance and proportion are key to the Stinger's design. Schreyer and Guillaume are proud of the Stinger's Coke-bottle curves and cab-backward profile. The greenhouse is shifted to the rear, which results in a rakish take on five-door fastback design and a roomy rear-seat package. 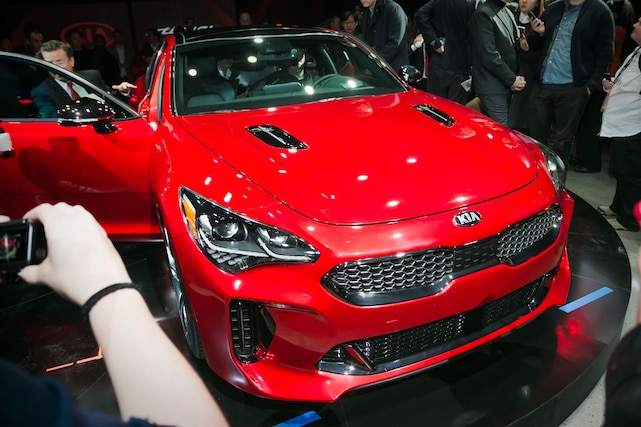 The long dash-to-axle ratio confirms a longitudinally mounted engine in this rear-/all-wheel-drive platform. A 2.0-liter turbocharged four-cylinder engine making 252 horsepower and 260 lb-ft of torque propels the base Stinger, and the higher-spec Stinger GT receives a 3.3-liter twin-turbo V-6 that makes 365 horsepower and 376-lb-ft of torque. Rear-wheel drive is the default and comes with a multiplate Torsen limited-slip differential. All-wheel drive with brake-based dynamic torque-vectoring control is available with both engines, but there is only one transmission option, the eight-speed automatic already seeing service in the Kia K900 and Genesis sedans.

Kia's parent company, Hyundai Motor Group, was formerly part of the massive Hyundai chaebol (conglomerate), which did business in everything from aerospace to heavy shipping. That conglomerate was broken up more than a decade ago, but HMG still produces steel. It's no surprise then that the Stinger eschews aluminum for a body composed of 55 percent advanced high-strength steel. Kia declined to disclose the Stinger's weight, but we estimate a loaded all-wheel-drive GT will be north of 3,800 pounds. A MacPherson strut setup in front and a five-link rear suspension carry that steel.

Steering is power-assisted rack and pinion with a constant gear ratio for the base model and a variable gear ratio rack for the GT. Brembo brakes with four-piston calipers up front and two-piston units at the back are available on the GT. Wheel and tire specs aren't finalized, but expect 18-inch standard and 19-inch optional wheels on the GT with staggered-width tires from Michelin (Pilot Super Sport) and Hankook (Ventus) being evaluated.

At 190.1 by 73.6 by 55.1 inches (length by width by height), the Stinger measures larger in every dimension than the BMW 4 Series Gran Coupe and Audi A5 Sportback. The Stinger is 7.5 inches longer overall with a 3.8-inch longer wheelbase than the Gran Coupe. These extra inches give the Stinger an impressive interior package. The rear seat fits the 6-foot-3-inch Albert Biermann, the BMW veteran who now heads Hyundai's high-performance development. Biermann says he can comfortably sit behind the front seat positioned to his driving position.

We were allowed only four laps total in all-wheel-drive and rear-drive GT prototypes at Kia's Namyang R & D center. But we can confirm potent thrust from the 3.3-liter twin-turbo V-6, acceptably crisp shifts from the eight-speed automatic, and predictable understeer from the all-wheel-drive GT. One sprint through a cone slalom demonstrated reasonably tight body control, but the best discovery occurred on the skidpad. The Stinger will drift, easily.

Many questions about the Stinger remain. And there is still much fine-tuning and validation testing ahead of the late 2017 or early 2018 on sale date. We're following this baby into production.