We will admit to occasionally blurring the line between what constitutes a genuine supercar and what may or may not be a more run-of-the-mill sportscar, but when it comes to the Lexus LFA there are no two ways about it—it's definitely super. You can argue the FR coupe may not have the sheer bench racing numbers to put it in amongst Lambo, Ferrari, McLaren and others, but everything else about the LFA screams "high end" and "unique." Now, one of the limited-edition V-10 Lexus produced in the early 2010s is crossing the auction block this fall in Arizona and can be yours, provided your pockets are proportionally super deep.

The pictured Obsidian Pearl 2012 LFA will be up for bid at Barrett-Jackson's Fall Auction at Westworld of Scottsdale and is No. 425 of the 500 LFA ever produced, as well as one of the 178 earmarked for the US market. It was purchased new from a Lexus dealer and has had only one owner, who has driven it fewer than 1,100 miles since its purchase. The owner has been storing the LFA in a climate-controlled garage and also has all the car's original documents, to boot. 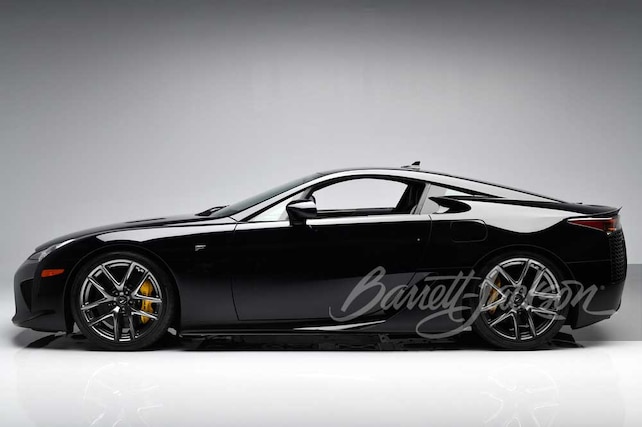 For those who never got to know the LFA's greatness, we'll give the cheat-sheet version of the supercar's attributes. Revealed at the 2009 Tokyo Motor Show, the Lexus features a hand-built, naturally aspirated 550hp 4.8L 1LR-GUE V10 that was codeveloped with Yamaha and has never been used in another Toyota/Lexus platform. The high-revving power plant is mated to a quick shifting semiautomatic 6-speed gearbox and sits in an aluminum front subframe that's integrated with a carbon fiber-reinforced polymer (CFRP) center monocoque. All the LFA's sharp exterior edges are designed for max aero performance, like the scoops in the hood and ahead of the fenders, and it even came from the factory with a speed-sensitive rear wing that extends at speeds over 50mph.

Low production supercars in general tend to hold their values very well and we're guessing the same will be for this example. New the LFA went for about $400k and recent auctions of the almost-decade-old car have netted at least that and more, with Nurburgring versions commanding even more, pulling down bids in excess of $800k (Nurburgring Package cars included an engine with reduced-friction components that resulted in 11 extra horsepower, revised transmission programming resulting in faster shifts, aerodynamic aids front and rear to increase downforce, stiffened and uniquely tuned suspension, stickier Bridgestone tires mounted on special lightweight BBS wheels, and special track-focused interior appointments). If you want even greater insights into the market watch for the Lexus, our peeps at Automobile did a great writeup earlier in the year you should probably give a read.

As for this LFA, you still have time to save your pennies or sell that kidney you didn't need to fund a bid. Barrett-Jackson's Fall Auction is set for October 22 to 24 at Westworld Scottsdale and will be its first live event since the auction house put those on pause earlier in the year due to COVID. For more info on this Lexus LFA, check out its post on the Barrett-Jackson site here.

Shopping Tips for Gotta-Have Platforms
So You Wanna Buy an FD3S Mazda RX-7 ...
What You Need to Know Before Buying an Acura Integra Type R
Buying A Honda S2000? Here's What to Look For