Go behind the scenes of a mind-blowing photo series created during one shooter's quarantine. 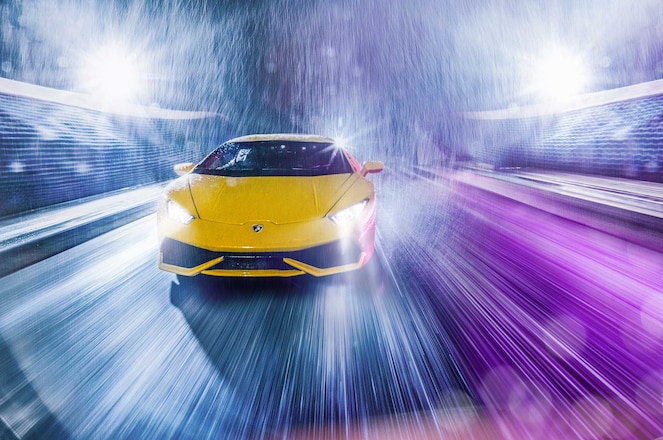 We suspect a lot of you out there about now are doubtlessly going a little stir crazy, a little cabin feverish with this infernal quarantine. It sucks on so many levels, we don't even want to get into it—but one of the pleasantly surprising ways it hasn't sucked is how this situation has inspired creatives who are confined to their homes to continue producing amazing content, especially in the world of automotive media. For proof, look no further than Mumbai, India-based photographer Kunal Kelkar.

If you don't already know of Kunal—be sure to check out his Instagram posts under his social-media alias @theautofocus—he started his professional automotive photography career in 2012 and has worked internationally and locally in India with brands such as Mercedes-Benz, Volvo, Rimac, Zenvo, Lexus, Jaguar, Land Rover, MG, and others. We caught up with Kunal last week after he posted a striking new set of images on Instagram titled The Art of Racing in the Rain.

Definitely a passion for cars. I have been told that I used to make car exhaust sounds ever since I was two years old! Photography has always been close to my heart, but it blossomed much later while I lived in Missoula, Montana, during my undergraduate years. 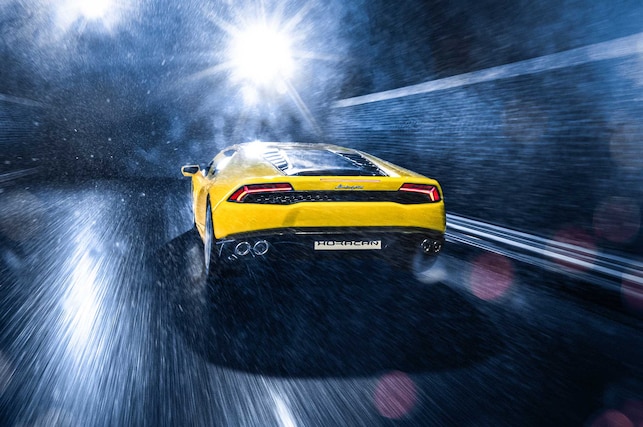 Tells us about the name you chose for the photo series.

Yes, yes, I know it's a title of a book and a movie, but it happened to be [a fitting] title for the series of model Lamborghini Huracan images I shot on a treadmill during the COVID-19 lockdown in India.

When did you come up with the idea to shoot the Lambo on the treadmill?

I had a few projects lined up in Europe during the month of April. My partner and I were supposed to be in Spain for a project, after which we were to go to Italy. Since the beginning of the year, I was in talks with Lamborghini about a photography assignment. On the 5th of March, I got a confirmation saying that they'd be happy to set something up in the coming month.

Lamborghini has to be my favorite supercar manufacturer, and I was looking forward to this opportunity. Unfortunately, the COVID-19 situation got worse and affected the whole world. Italy was the most affected at the time. Soon after, India was on lockdown and a global travel ban ensued, you know the domino effect after that.

With a total lockdown issued, shooting cars out on the streets was completely off the table. My mind was constantly going on and on about the fact that I would have been photographing a Lamborghini in Tuscany, and I think that's what inspired me to try and do something creative with the 1:18-scale Lamborghini Huracan replica.

Since the gym was shut down, the treadmill at home was put to use. During a cool down, it dawned on me that the treadmill belt below looked very similar to a road in motion something that every automotive photographer would be familiar with from hanging out from the back of a car to take rolling shots. It was a eureka moment and I thought, technically it is just like a rolling road, so it should give me the similar results to if I were photographing tracking or rig shots of a real car. I tried it out immediately, and it was exactly as I had imagined.

With the lockdown outside and Lamborghini on my mind, I figured this would be the perfect time to try it out the idea. 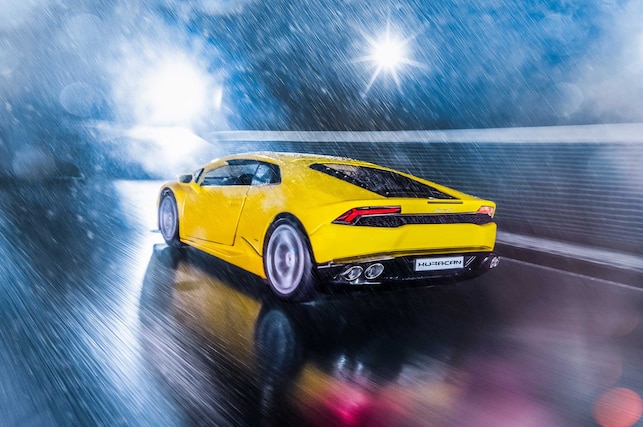 I have photographed some beauty, static photos of model cars in the past, but this was the first time I was playing around with forced perspective for a personal project.

Was it harder than you thought it was going to be?

I think what was hard was trying to make the car, which is just a simple model, look like the real thing. The panel gaps, the paint, and the proportions are far from the real car, and I was really aiming to make it look like I had shot a real Lambo.

What was the biggest challenge?

The biggest challenge was getting the whole scene in focus. A model car behaves very differently from a real one. Even though the car was attached to the base of the treadmill with a string to hold it in place, it still moved quite a bit, either left or right, or was bouncing over the texture of the treadmill belt. Shooting at a slower shutter speed to capture the motion of the treadmill "road" didn't help either. Just like shooting a proper tracking shot, the "continuous high" photo burst setting on the camera definitely helped to capture multiple shots, to make sure there were some in focus.

I think another challenge was not wanting to spray too much water on the car because that led to large water droplets forming on the surface and it looked completely unrealistic.

What gear did you use? [For you non-photographers, this is probably going to sound like gibberish—but who doesn't like gear?—WW]

The camera was a Fujifilm X-T3 with a X-Series 16-55mm f/2.8 lens mounted upside down on a Vanguard VEO tripod. The primary lighting came from two Lumecubes, basically small Bluetooth controlled continuous lights that are often used to shoot video. In addition to the Lumecubes, I used two Profoto B10's with their modeling heads on. These are portable flash units that are powerful enough to shoot actual cars as well. The ambient light and the different color highlights were created with a Yongnuo YN360 LED light wand and a LED pixelstick.

And what about the rain and the fencing?

The rain and water on the treadmill was added in using a simple spray bottle, and the track fencing was emulated by using a ping pong table net. 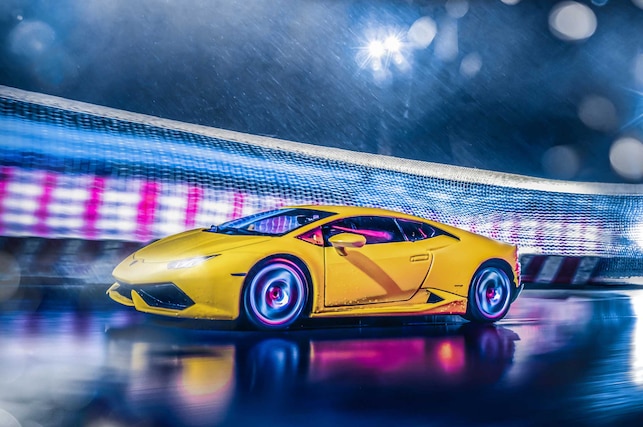 How long did it take you?

The first shot took the longest, probably about two hours. There was a lot of experimentation with the lights and the speed of the treadmill. Once it was all locked in, I think the other shots were done in the third hour.

How many exposures went into the final images? [This is photographer-speak for the different images that are composited into a final product—WW]

The front driver's-side shot was a total of three exposures. I did add in the extra light element behind the ping pong net with the pixelstick, so I needed to get a long exposure of that. There were also separate exposures for the car and road, and then ones with the rain added in.

The head-on shot and the rear shots were two exposures each. One for the car and road and the second for the rain.

Are you going to try it again? Is this the start of a new series of work?

I would definitely like to try photographing some other scale models in a different style and then circle back to the treadmill concept again. But I do think that working on scale models is a great way to experiment with lighting setups that could help when it comes to photographing real cars. The lockdown really made me think that although I may be an automotive photographer, I am at the core of it a photographer. Instead of just waiting to get out there to shoot cars again, why not expend some creativity, especially in terms of using limited elements to come up something cool? I urge other photographers to use this time to channel their energies and explore different aspects of their creativity.