After years of rotting in a warehouse, the 4-banger JZA80 designed for the JGTC will be restored by the team that built it. 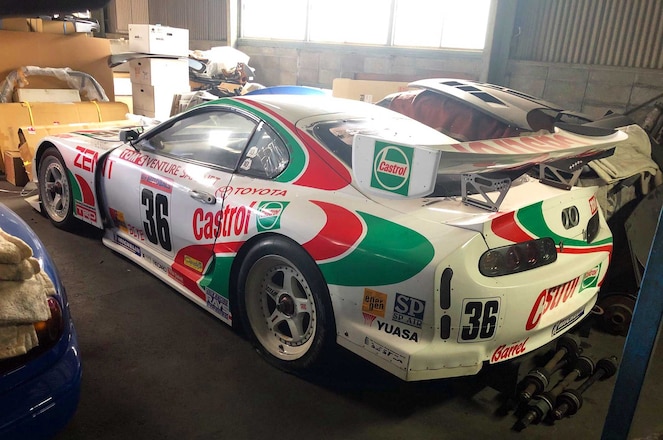 There's something romantic about barn finds. Just the idea that there are cars hidden away waiting to be rediscovered and returned to the road, rust spots and all, is enough to captivate automotive enthusiasts around the world. In the United States, a typical barn find might include a stash of classic American cars. But elsewhere, the vehicles people lock up and hoard are often quite different.

This 1998 Toyota Supra race car, recently discovered in Japan, is a perfect example. You see, this isn't just any Supra race car. (If you've played any of the Gran Turismo video games, you should recognize the car's livery right away.) This here is a TOM'S Castrol Supra that raced in the Japan Grand Touring Car Championship (JGTC). According to TOM'S Racing, the car was found in a warehouse in the Chugoku region of Japan. Presumably, it's been stored there since the last time it raced, as the body still has scratches and other damage sustained on track. Its magnificent green and red Castrol graphics, however, are still clearly visible.

Though it doesn't look that bad in these photos, the barn-find Supra race car is apparently in rough shape. For one, there's no engine under the hood, though TOM'S suggests the engine was found with the car. Second, many of its parts are rusted from years of neglect. TOM'S Racing hopes to restore the car to track-worthy condition, but it's asking the internet for help. The Japanese race team set up a crowdfunding project to raise money for the restoration. Their goal? A cool 50,000,000, or about $466,000 at current exchange rates. 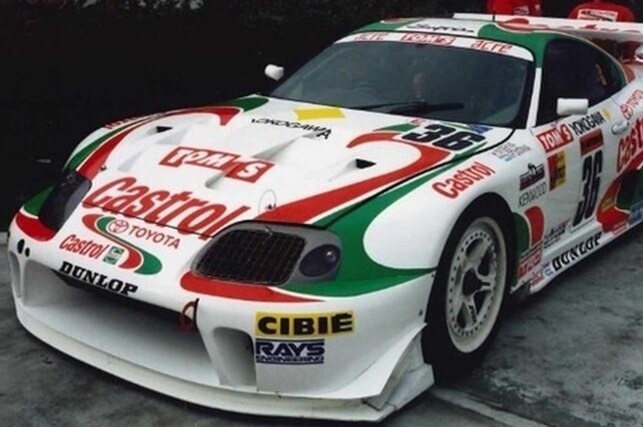 In recognition of your contribution, TOM'S will engrave your name somewhere on the car. Exactly where depends on how generous you're feeling. For example, 5,000 (about $47) will reserve you a "special site" on the car, which you'll likely have to share with anyone else who donates at that level. For 3,000,000 (roughly $28,000), you get your name engraved on a special safety plaque on the driver's seat, along with race passes for the entire 2021 Super GT (the successor to JGTC) season and access to the TOM'S Racing hospitality suite. You'd also get to rent a car from the TOM'S garage for a day on the track. Even with all those extra benefits thrown in, that's a steep price. But for a TOM'S Supra super-fan, it just might be worth it.

A TOM'S Castrol Toyota Supra won both the JGTC GT500 class drivers' championship and team championship in 1997, but the TOM'S Supra was less successful the following year. This particular Supra's provenance hasn't been revealed yet, but the fact that TOM'S Racing has decided to restore it so soon after its discovery could mean it's an important car. The team will post video updates on its progress to YouTube, and donors will receive exclusive regular updates on the project through the crowdfunding site.

From the Editors of Super Street: This is what all barn finds should be! If the engine is, in fact, with the car, then it is very likely a 3S-GT inline-4—the same homologated engine Toyota was rallying with at the time—and not a 2JZ-GTE, like we're certain fan bois are hoping for. If you want to see another badass widebody JZA80 from that era of JGTC, dip into our ToyotaFest lookback for a couple photos of the 5Zigen Mk4.

We're not ready to plunk down any money just yet, but we'll certainly be following to see how this restoration turns out. At the very least, the find makes us want to dust off our PlayStation 2 and pull the TOM'S Supra out the garage for a spin around Fuji Speedway.

How Much Would You Bid For This 1997 Toyota Supra With 48K Miles?
SuperStreetOnline features