A90 Supra Loses Its Roof For Targa Top Concept Car

Toyota uses virtual SEMA to flex its drifting Mk5 Supra and kickoff the video build of the roofless A90 "Sport Top" custom. 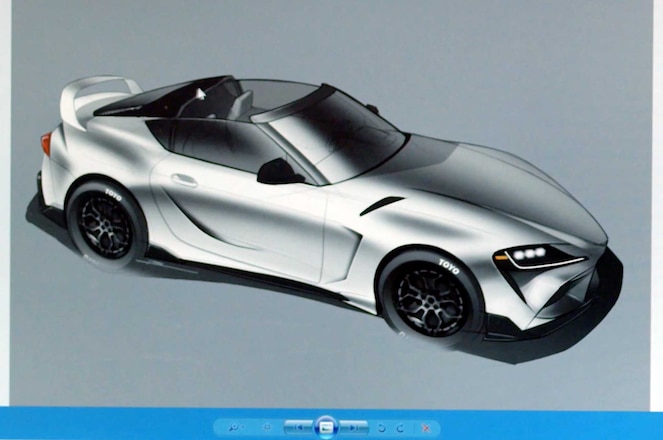 It's weird that we're in a year when the SEMA Show "crunch" also feels like just another day at the office but trust us when we say we're grateful that the industry is adhering to old habits and trying to make a marketing push in these last months of 2020. The newest bulletins come from Toyota, which is still committed to introducing several custom builds it had slated for SEMA but is doing so virtually and piecemeal, which is to say they're unveiling a few cars now, kinda through SEMA360 (virtual SEMA), and few more will be debuted later on, in a couple of months or so, they say.

Of the first wave of reveals, four were right up our alley, a quartet of uniquely customized Mk5 Supra, although two of them have been out of the bag since summer. The other two are true debuts—a rolling piece of art from one of the guys at Race Service; and a topless sequel to the Mk4 Supra-inspired Heritage Edition Mk5 build that came out at SEMA '19.

Versions of previous gen. Supra came with a detachable Targa top that, at least for the JZA80, Toyota dubbed a "Sport Roof." Well, the same people in Toyota's marketing department who brought us the 500hp Heritage Edition A90 one-off last year were given the green light to build another, and this time they decided to replicate the removable roof panel from old-school Supra.

Tentatively called the "GR Supra Sport Top Concept," Toyota is documenting the custom build on YouTube and sent over the first episode of the series, which reveals quite a bit. We get to see the car before it's hacked up and builders indicate the roof will be released via key fob and come off in two pieces, mostly so the panels will be easier to stow (ostensibly because one piece would be too big to fit in the trunk). Unfortunately, no photos of the build were provided, likely because it's not complete yet, but in the video we're shown a rendering that is on Toyo Tires, which leads us to believe maybe the one off will be revealed at the Toyo Treadpass substitute event the tiremaker is thinking of doing later in the year.

The Papadakis Racing Rockstar Energy Drink and Ken Gushi Motorsports A90 Supra have been competing since September, and we've actually had info on the Papadakis Mk5 since April, but Toyota wanted to give them a formal acknowledgement at SEMA360. Probably the most remarkable thing about both is that they rely on the car's native engine, the BMW B58 turbo straight-6, for power output pushing 1,000hp and not the 2JZ-GTE from the previous gen. Supra that all the fan boys think is the be-all, end-all.

This project features artwork by Ornamental Conifer, the alias of British artist Nicolai Sclater who is art director at Race Service, the Los Angeles creative agency. Inspired by enthusiasts' GR Supra builds, Sclater started with a '21 GR Supra 3.0 Premium in Turbulence Gray and decorated it with expressions like 'True to Form' and 'Lightning Response' as nods to past and present Supra attributes. Working with enamel paint and brushes, Sclater hand painted every letter and graphic, a tribute to the lost art of sign painting.