"I've had the build in my head for a long time," explains Ted Ryon when we start asking him about how his RB25DET-swapped Datsun 280Z came to be. "I remember watching a video with my college roommate back in 2005 of a blue RB25 S30, and back then that was unheard of. That really shaped where I wanted to go in the future with building an S30."

In the intervening years, the Huntsville, Ala. resident has gone through other project cars—mostly Hondas, curiously enough—but has carried a torch for the alluring long-nosed Datsun classic all this time, in particular one he could turn into a resto-mod build and shoehorn a more modern RB straight-6 engine into. So, in 2014, unable to fight the urge any further, he did what we all do when it's time to pick up a new project: he dove headfirst into searching the internet and Craigslist. He sought a clean but modified 280Z, one preferably with fuel injection (i.e. from the later model years) and an almost immaculate body, clarifying, "I had enough respect for the classic Z community to not tear up an unmolested S30."

The Discovery of S30 Gold

After a few misfires with Z that either had major rust issues or parts missing, he found an S30 in the summer of '14 that met his criteria for sale by a gentleman just outside of Atlanta, Ga. When he initially pulled up and saw the 1978 280 parked in the driveway, it made a huge first impression. "I knew from the moment I got out the car I found what I was looking for. My heart was pounding with excitement, and being a veteran of buying used cars, it took everything in my body not to just drop the cash on the car right then and there." 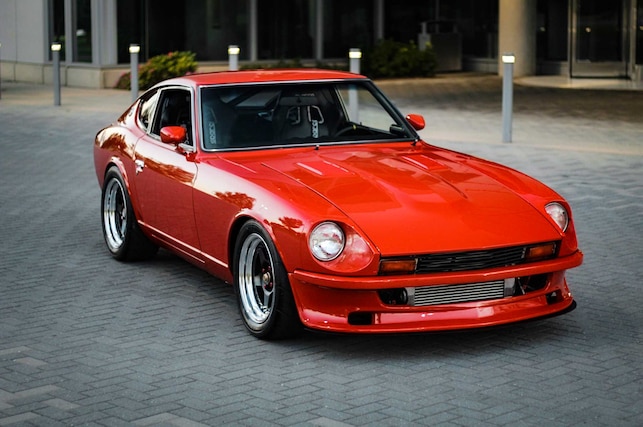 It really was a peach, too. It had the nearly perfect body Ted was looking for, and only a few little things that needed attention. The car's original engine was replaced with a L28ET out of a mid-'80s 280ZX (S130), and a previous owner made obvious attempts to modernize the interior with Corbeau seats and a Grant steering wheel. The dash was cracked (a pretty common issue with S30), some of the body seals were worn, and others looked like they were replaced. But probably the most remarkable things about the come up are that the 40-plus-year-old chassis had just 77k original miles and all its original documentation, including the original warranty and invoice paperwork from the dealer with the original owner's name.

Ryon spent much of 2015 tweaking the L28ET his S30 came with, including building a custom turbo setup and running a MegaSquirt ECU for tuning. The car was strong, but as it sat Ted didn't feel like he had a personal connection with it, so In late '15 he started doing research into swapping out the motor for something more modern and easy to make power with but still in line with Datsun / Nissan heritage. A self-professed hands-on guy, Ryon decided to do the motor swap himself after figuring out what it took, adding, "After all, this might be the story I tell my grandkids when they see the classic parked in grandpa's garage." 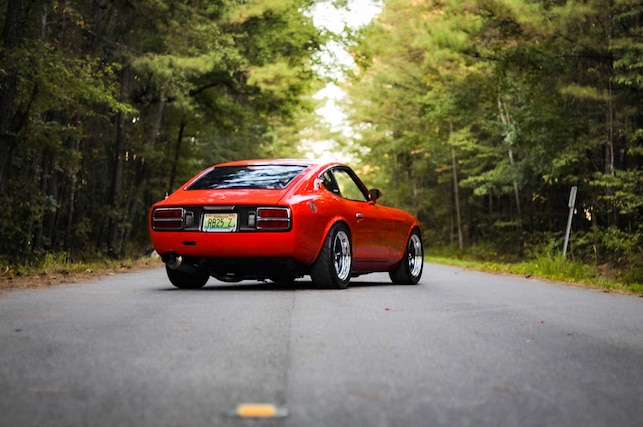 As can be the case in these matters, life got in the way; in this case it was Ted's work, which took him away from the 280Z on business travel and stretched out the build time. He got around to disassembling the car in the spring of '16 and started the process of going through the existing wiring in the engine bay, shaving any unnecessary mounting points and prepping the car for the engine swap. At the same time, he was ordering copious amounts of parts for the mill switcharoo and updating the interior.

With the old power plant out and the engine bay ready, Ryon went ahead and bought the RB25DET NEO from JDM Miami in Florida and had it shipped directly to Midnight Auto in Huntsville. The shop went through the motor replacing all of its seals and belts, as well as installing the SPEC clutch—basically getting the RB ready to swap. Ted then grabbed the inline-6 and started bolting on all the supporting bits in his garage to convert it from a stock RB25DET to a big single turbo. He had the oil pan modified by fabricator Patrick Bowser to be a rear sump in order to fit, and further prepped the engine by mounting most of the bolt-ons, manifolds, turbo, oil pan, and accessories while the engine was on a stand.

With the help of friend Justin Taylor, Ted crammed the RB into the 280Z chassis using just hand tools; from there they wired, plumbed, and topped off fluids. In order to get the engine in, the factory transmission mounts had to be cut off of the car. Ted also plumbed all new PFT fuel lines from front to back to ensure a healthy flow to the motor. Once the motor was bolted in using McKinney motor and transmission mounts, he wired in the power plant using a Wiring Specialties Pro harness mated to a Haltec Platinum Pro ECU. Ryon also fabricated custom intercooler piping in his garage and had a friend build the exhaust using Vibrant exhaust materials. 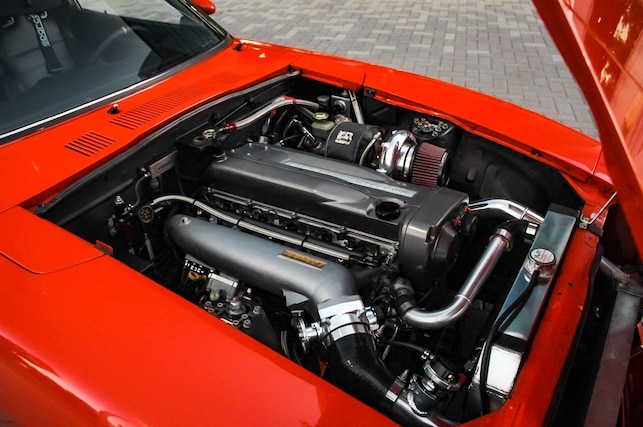 Going for a specific look, Ryon opted for a polished Hypertune throttle body mated to a GReddy intake manifold. The RB25 engine covers were replaced with RB26 covers, but to avoid being seen as blasphemous the front cover was shaved to avoid misrepresentation. Other engine goodies include a fuel rail from Radium Engineering, custom fabricated intercooler piping, and Turbosmart blow-off valve and wastegates.

While this went on, Ted was upgrading the interior. He ordered a fiberglass dash from Retro-Spec and fitted it with Speedhut gauges and deleted the a/c with a Skillard panel delete plate. He also installed the Momo steering wheel, a custom armrest and shift boot that was stitch matched to the Sparco R100 seats, and an Autopower bolt-in roll bar for safety.

A couple years into the S30 project, Ted was feeling restless. He wanted to take his baby for a drive, which is how in November of 2017 he ended up at Dynosty Motorsports, a respected tuning shop in Louisville, Ky. They were able to wind up the RB25DET to 417 horsepower and 358 lb.-ft. of torque at 16psi of boost pressure before the mill suffered some fueling issues, so the car was back down most of 2018. Over that time, Ryon took the opportunity to do some additional work; he converted from U-joint axles to more modern CV axles, bolted up his Work CR01s at the corners, upgraded the differential and mounts, and worked on other interior upgrades. 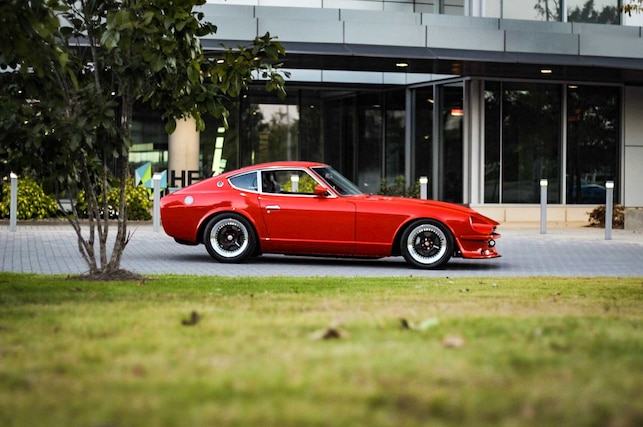 This was also when Ted corrected some issues with the body he discovered over the course of ownership, namely a little rust, a dent in the hood, and "way too many rock chips to bare." His friends at Madison Collision Center were no strangers to working on older cars, and after Ryon provided the shop with some rust repair panels, they removed the body cancer and fixed any imperfections on the car. They also converted the front bumper to a 240Z-style one and paired it with a Xenon valence.

When Ted got the Z back in the fall of 2018, he gave it some final bits of love, including adding a Skillard aluminum front splitter. He then returned to Dynosty where the car received a final inspection and some minor fixes and upgrades, including upgrading the fuel system with an improved pump, throwing on a new water pump and timing belt, and adding an ATI damper for peace of mind. The tuners managed to squeeze out a more refined 474hp and 374 lb.-ft. of torque at the same boost level.

These days Ted Ryon's RB25 Datsun 280Z restomod is used often as a weekend cruiser and fulltime "smile maker," frequently hitting up local meets in a Huntsville scene that is on the rise. Big plans include taking his prized whip to regional events like ZCON and Import Alliance, as well as continuing to upgrade with elements like electric power steering and possibly building a backup motor for more power. In fact, the minor refinements never seem to stop for Ted, who admits to tinkering on his S30 whenever he can. "The beauty of owning a car like this is that you can always find an excuse to work on it."