The Only Rocket Bunny V2 S13 Coupe in North America 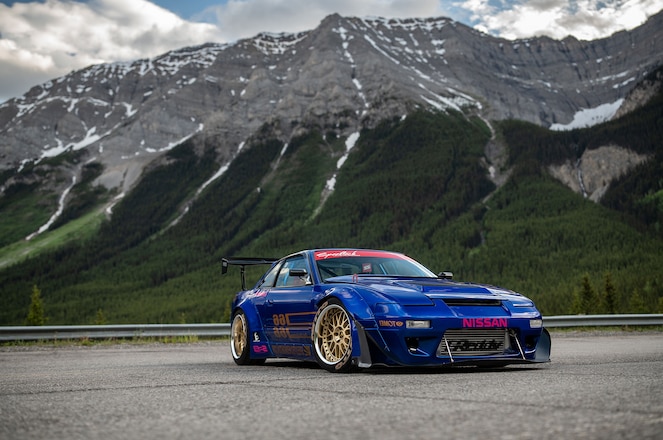 Canada, we love your car scene. Since they're such close neighbors, we've always had a stream of features come from across north of the border, and looking at recent show coverage (pre-2020, of course) we can't help but be a little jealous. Canadians seem to have a wealth of truly great builds, and we feel like we're only scratching the surface when it comes to representing their thriving tuner community.

Vehicle owners like Simon Tham are part of the reason why the scene is so hot in the northern provinces. The proprietor of TFC Canada out of Edmonton had a dream of creating a Nissan S13 different from all the rest, and with this widebody 1990 240SX coupe we think he's nailed it.

Digging into the particulars of Simon's 240, we fixated momentarily on one detail: 295-width rear Nitto NT05 tires. Holy hell, that's a lot of meat on an S-chassis! It kinda didn't make sense to us initially how a tire so wide and usually found on super cars and legit sports cars ended up on an S13 build. We've seen rears as wide as 275 on a widebody 240SX but 295 is a little bonkers, especially when nothing looks out of the ordinary on the finished product. 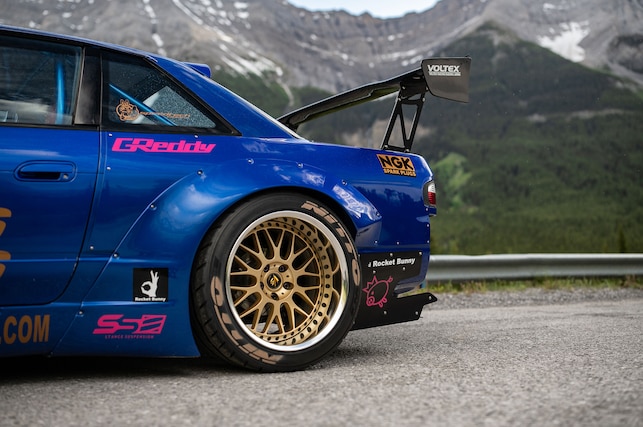 Certainly, the very special custom TRA Kyoto Rocket Bunny Version 2 aero setup is part of the equation of getting fitment right, a kit that didn't really exist before this car. "They made the V2 for the 180SX hatchback and Silvia coupe," Simon explains. "A good friend of mine, Leonard Song, owner of First Gear Project, was the one who talked [TRA Kyoto's] Kei Miura into making the kit for us, as they never made a V2 for a Onevia coupe." (For our grom fans, a "Onevia" is an S13 that starts life as a Silvia but eventually gets a 180SX pop-up headlight nose transplant.)

Having North America's only Rocket Bunny V2 240SX coupe kit gave Simon's S-chassis a bit more room in back for lots of tire, but in addition to the flares, 30 more mm is added to each side via Origin Labo over-fenders underneath the RB extensions, all the body work and 350Z Daytona blue metallic paint being sprayed by Trademark Auto House. Gold Work VSXX 18s fill up the wheel wells and a simple but expressive gold and pink livery designed by Speedtech's Amanda Archibald ties everything together tastefully. 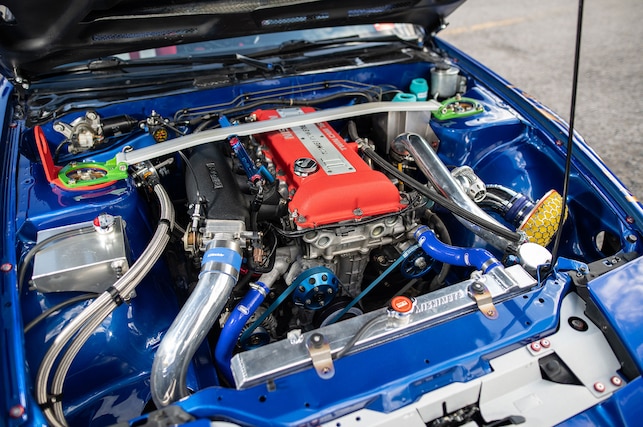 We're no strangers to the handiwork of Speedtech Racing Development and the shop's owner, Jesse White; in September, we featured Trung Nguyen's '04 Honda S2000, another project that SRD had a large role in, and that car came out bitchin'. For Simon's 240SX, Speedtech did most of the engine bay and drivetrain work, which includes a Tomei- and GReddy-heavy SR20DET Red Top swap, NISMO diff, and Driveshaft Shop axles and shaft, as well as set up the chassis. The coupe's ride is dialed in with Stance GR+ Pro coilover suspension and Megan Racing adjustable rear arms, while some Tein braces limit chassis flex and Suspension Techniques stabilizer bars put the kibosh on body roll.

Rob Blackmore and Tucked Inc. took care of concealing the wiring harness in the engine compartment, as well as setting up the S13's ECU. Speedtech's Matt Le then tuned the power plant, which makes a respectable 361whp and 291 lb.-ft. of torque on the rollers of a Mustang dyno.

As if to play up the S13 240SX's Canadian-ness, shooter Mike Boldt captured the coupe against a backdrop of the Rocky Mountains you can find in Alberta (pretty, eh?) Simon - who also has an NA K-swap EK9 Civic in the works - is very pleased with the project's end result and gives all credit to the team who did the work and friends who helped him out along the way, referring to them as the "real MVPs." While our countries may be separated by a border, it's makes our heart happy to see that good taste is universal.

SuperStreetOnline
Homebuilt Turbocharged & Widened 1995 Mazda Miata
Unlike most builds that are a product of some grand scheme of daydreaming and sometimes documenting plans for picking up a specific car and applying a headful of parts and changes to it, this turbocharged 1995 Mazda Miata is the exact opposite. Its owners and builders, brothers Alex and David Wong, had no intentions of
Rodrez – Jan 11, 2021