It even has a more hopped-up version of the IS F’s 2UR power plant, but Lexus is saying don’t call it a comeback.

From the Editors of SS: Well, well, well, what do we have here? Our Monday morning became a whole lot more interesting waking up to the announcement of a new V-8 Lexus IS, the IS 500 F Sport Performance - but do not call it an IS F. While it uses the same 2UR-GSE mill and is produced for only the North American market, like the F, the 500 F Sport Performance is an entirely different beast, insists Lexus, targeting the likes BMW's M340i, Audi's S line, even the Cadillac CT4-V Blackwing. But who are they kidding? This thing is 50 pounds lighter than the much sportier RC F coupe with the same V-8 - our kin at MotorTrend take a deeper dive below.

Here we were worrying about the future of performance at Lexus. The midsize GS sport sedan and its spicy GS F halo flatlined last year, and Lexus seems to have busied itself diluting the F hot-rod division's name with flash-over-dash F Sport styling packages available even on its hybrids, crossovers, and hybrid crossovers.

Only a single full-blown F model—the RC F coupe—is left, and an entire generation has grown up unaware that the shrieking V-10-powered LFA sports car existed.

No wonder the recently updated IS sedan, in particular the IS 350 F Sport model, feels like the chest compressions keeping Lexus performance alive. The IS 350's sporty ride and handling balance is satisfying and fun, though its 311-hp V-6 engine could use a jolt.

But stand back, everyone, because a defibrillator has arrived: The IS 500. This IS's high-revving 5.0-liter naturally aspirated V-8 engine is as electrifying as paddles applied without cold, resistance-lowering medical jelly. People, we've found a pulse. 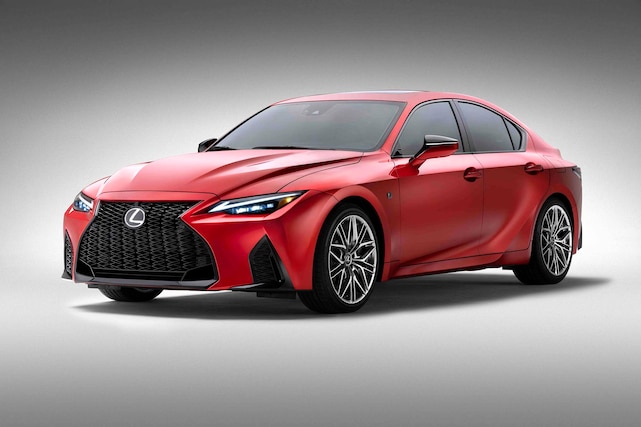 The IS needed some minor work to fit the larger engine in its compact snout, mostly pushing the radiator forward, lengthening the front fenders to make a little room and meet the bumper, and fitting a new hood with a 2.0-inch power dome to clear the V-8's noggin. Given how the IS 500 is destined only for North American markets (ruling out cost- and engineering-intensive structural changes) and absent further detail from Lexus, it's safe to assume the V-8 installation wasn't too difficult.

Other than a new set of lightweight Enkei 19-inch wheels (1 pound lighter in front, 2 pounds in back), two extra strakes molded into the rear bumper's diffuser, dark chrome window trim, and quad exhaust outlets (two per side, stacked like on past F models), the IS 500 looks exactly like an IS 350 F Sport. There are actually fewer "F" badges on the IS 500 than on the IS 350, with only the Lexus "L" logo and small "IS 500" lettering on the trunk lid.

It's deliciously subtle, but if you're thinking the IS 500 might seem more shocking if it didn't look like just any other IS sure. You're probably also furiously Googling the Wikipedia page for the Lexus IS F, the last IS with a V-8—this same engine, in fact, covered by a hood with a very similar bulge—and wondering why the IS 500 isn't being called an IS F. 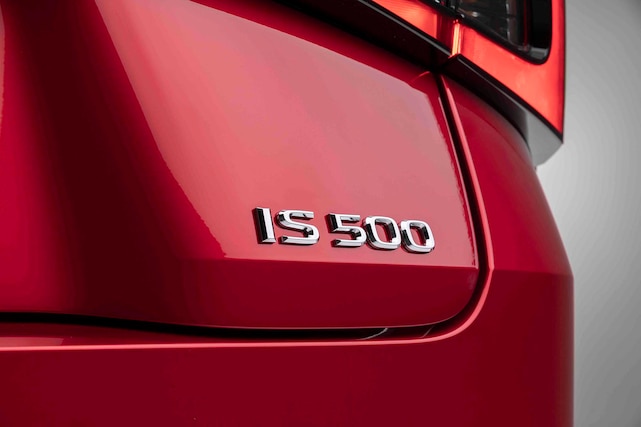 Not an IS F

Except the IS 500 is not an IS F. That muscled-up IS was sold between 2008 and 2012 and defined by its 416-hp version of this V-8 and a track-ready chassis. An entire IS generation has come and gone since without a new F, and Lexus isn't saying whether one will join the current IS family. So IS 500 it is, and beyond its engine, it lacks any meaningful upgrades over an IS 350.

Lexus is adamant that the IS 500 be recognized as an "F Sport Performance" variant, a new performance tier it created between the mild F Sport treatment and the F (you know, if Lexus still offered an IS F). Curious how you'll notice these new F-minus models? We were directed toward the small "F Sport" fender badges, which trade the IS 350 F Sport's white background paint for black—a break that only onlookers equipped with bionic, Terminator-style telephoto eyeballs might discern.

It's easier to see how the IS 500 fits neatly into this new between-two-F's F Sport Performance program with its mix of F Sport and whole-milk F components borrowed from the IS 350 sedan and RC F coupe. Take the engine: It's the same unit, making the same power, used in today's RC F coupe. Yet it spins the IS 500's rear tires via the IS 350's eight-speed automatic and the limited-slip rear differential from that model's Dynamic Handling package. You can't get the RC F's available torque-vectoring rear diff.

The rest of the IS 350 F Sport's Dynamic Handling components are standard, including its Sport+ and Custom drive modes (on top of Normal, Sport S, and Eco), adaptive dampers, stiffer springs, staggered-width 19-inch summer tires, and a trunk lid spoiler. A new-for-2022 Yamaha rear chassis damper quells body vibrations and deflections (other Lexus models have used these long horizontal dampers), and the brake rotors are upsized to 14.0 inches in front and 12.7 inches in back. 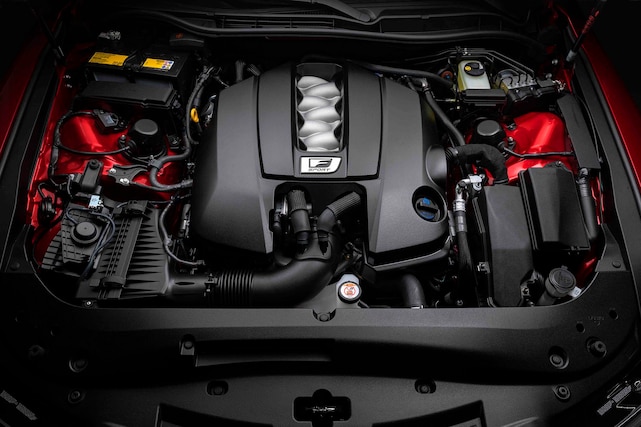 In the Grand Scheme of Things

None of this really screams "IS F!" Instead, it's a page taken from the playbooks of BMW and Audi, which have long offered such midgrade performance models. M Performance models such as the M340i, which live between the regular 3 Series and the M3, or Audi's S line nestled under the wilder RS level. A little more power, a little more handling, commute-friendly ride quality, low-key visuals.

The Lexus, instead, relies on good old-fashioned engine speed and displacement to generate big power—and enough of it to actually compete on paper with the 472-hp Cadillac CT4-V Blackwing, 473-hp BMW M3, and 469-hp Mercedes-AMG C63. Redline is marked at 7,300 rpm, and peak hp hits at a stratospheric 7,100 rpm. Like the RC F and previous F models that used this same 5.0-liter engine, the IS 500 employs a tube connecting the intake and the firewall to literally pipe in the V-8's glorious snort.

The tube is a decent metaphor for the IS 500 overall. It allows the driver to mainline the V-8's awesomeness aurally and motivationally while practically no one else will be the wiser. Few around you in traffic might notice the extra exhaust burble unless you're flogging the thing, and even then they'd likely assume you're in an IS 350 with an aftermarket exhaust.

Details such as pricing, complete fuel economy estimates, and how much the V-8 shifts the IS's weight balance forward must wait until closer to the on-sale date later this year. Ditto how this new "almost F" will affect future Lexus Performance models. But let's not kill the vibe here. 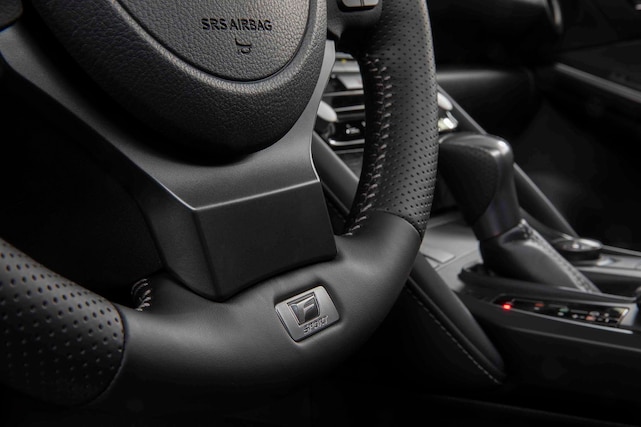 We're told the engine and other changes add 148 pounds to the IS350's curb weight, bringing its claimed figure to just under 3,900 pounds—50 pounds lighter than the RC F coupe with the same V-8. Lexus estimates the IS 500 can reach 60 mph in 4.5 seconds; the barely heavier RC F does the same in 4.3 seconds and reaches a 168-mph top speed. It wouldn't be a stretch to expect similar real-world numbers from the IS 500, a pulse-quickening thought indeed. Now, with feeling, please F it, Lexus.

EPA FUEL ECON Not yet rated