Home  |  How To  |  Paint Body  |  Introducing: The Superman Inspired Kia Optima Hybrid
Subscribe to the Free 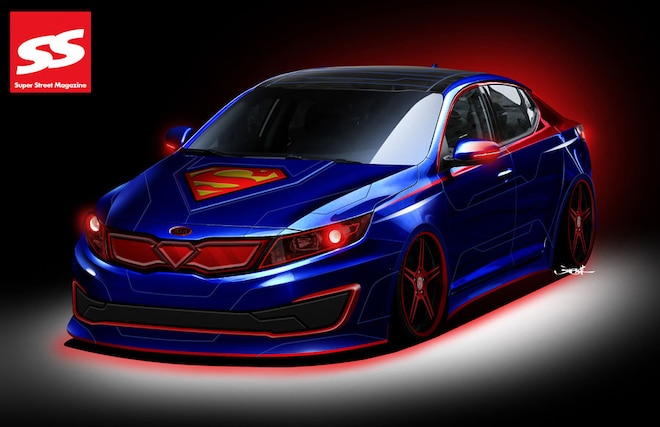 By now, you've no doubt seen most of the awesome DC Comic-inspired Kia cars for the "Built For Justice" program - and this Optima Hybrid will be no different. This time, using Superman as the source of inspiration, you can expect one of the strongest builds yet. Not quite superhuman but pretty damn close. As you already know, Superman - born Kal El - was sent away from his dying home planet of Krypton to Earth, where he was raised by Jonathan and Martha Kent as Clark Kent. As an adult, he was not just a reporter for the Daily Planet but subsequently became the protector for Metropolis City because of his superhuman powers. With the formation of theJustice League, Superman became their outspoken leader. And what better magazine to be responsible for this "Super" Kia build than Super Street!

Our goal was simple; transform the Optima into a car that Clark Kent himself might drive. We started the build process with the creative mind of Jon Sibal, a seasoned comic artist and the man behind countless automotive renderings including our Kia Soul project. With his magic computer, he took our ordinary Optima Hybrid and gave it strength, power and style. A one-off widebody conversion was called for, along with a very sleek paint scheme, extensive lighting, custom interior and air-ride suspension that would set this Superhero project car apart from the rest.

To help with the build, we called on perfectionist Mike Vu and his team at MV Designz. From a simple drawing from Jon, they would havetheir work cut out for them transforming the Optima. The project got rolling with the body with both fenders and rear quarter panels reshaped to make the carwider. A wider stance would only take the exterior so far, so the team at MV Designz fabricated a new aggressive front lip.

With weeks dedicated to perfecting the body, paint came next and the team chose a deep blue paint to match Superman's tights. A red chrome vinyl was chosen to drape along the trunk and the shoulders of the Optima, acting like Superman's glorious cape. The best part was yet to come... The hood was customized with the signature Superman insignia. The easy way to do it would be painting it on, but the team fabricated a logo out of transparent thermoplastic and molded it into the hood. Light strips were installed to illuminate the symbol with the flip of a switch. How cool is that?!

The car debuted at the Chicago Auto Show this month, but we'll have another update for you soon with more exclusive behind-the-scenes photos. 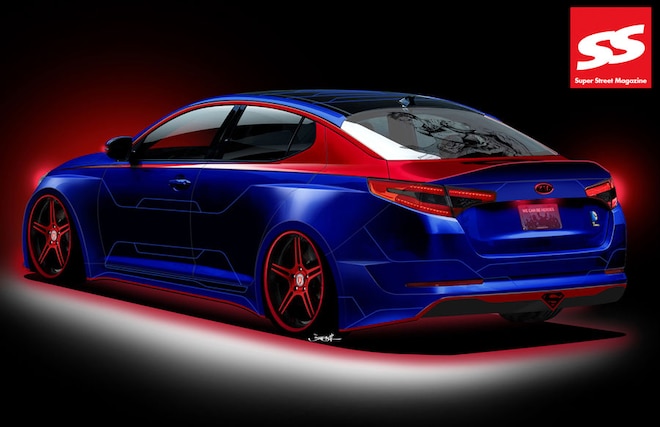 SuperStreetOnline
Bringing a 30-Year-Old Integra GS-R Into the 21st Century with Pioneer Electronics
I’m sure you’ve noticed that we talk quite a bit about modernizing older chassis here at Super Street Network, and for good reason. By far the most popular group of cars to own and modify, at least within our demographic, come from the late ‘80s to ‘00 era, and with 20 to 30 years on
Rodrez – Feb 26, 2021

SuperStreetOnline
Honda Civic Hatchback Project K24 Pt. 13: Fluid Control
Chase Bays – Coolant Overflow Last year, as I began piecing this hatchback project together after it came back from DTM Autobody for its color change, Chase Bays provided their Tucked Aluminum Radiator kit that caught my attention for a few reasons, the first being that rather than just a small radiator that would sit
Rodrez – Feb 24, 2021

SuperStreetOnline
Honda Tuning’s Project K24 Civic VX Pt. 12: Fuel & Monitoring
In the last update on Honda Tuning’s Project K24 Civic VX, I worked on getting the engine and transmission bolted in place along with its axles and a new wheel and tire package. It’s definitely starting to look like a car again after I’d completely torn it down for paint and bodywork a little over
Rodrez – Feb 5, 2021

SuperStreetOnline
Project K24 Pt. 11: 1992 Honda Civic VX Gets New Wheel & Tire Package, K-Series Engine Swap & Axles
In terms of project car building, some might assume that working for the Super Street Network and dealing with cars like this long-term 1992 Honda Civic VX hatchback means spending multiple days of the week wrenching away and making progress. The reality is, as much as I’d love to be able to do that, my
Rodrez – Nov 16, 2020

After a few days working on the chassis, brakes, and exterior it's time to get the Week to Wicked Subaru BRZ ready for a bump in power with some help from our friends at SPEC and GReddy.

In day 2 of our 120 Hours/Week to Wicked build our 2013 Subaru BRZ gets some new wheels, a new set of taillgihts, some carbon fiber pieces, and a headlight restoration job. 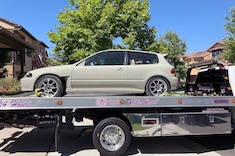 In part 6 of our Project K24 build we entlist DTM Autobody's help in fixing a few issues on our Civic project car as well as giving it a new coat of paint. 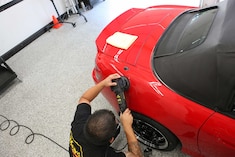 Paint Correction the Meguiar's Way
SuperStreetOnline how to

Our AP1 S2000 project car gets an exterior revamp courtesy of Signature Auto Body as well as a brand new set of Advans. 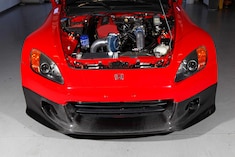 In part 4 of our 2019 Civic SI project car build we turn our attention towards the intake side of things. 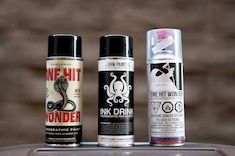